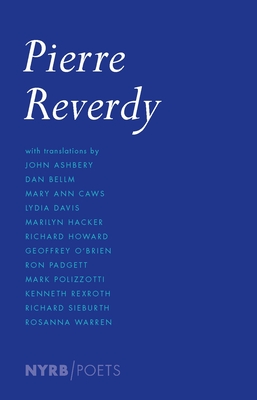 Reading Reverdy's work is to experience the uncompromised view of a dedicated outsider. Isolation is preferable to companionship, stasis easier than change, paranoia more dependable than trust. Reverdy finds stability in distance and waiting; but it doesn't mean that he does not desire release from solitude. The power of his poetry -- lines that upend a concrete detail with a staggeringly unworldly image, descriptions of bleakness that are utterly rich -- lies in that painful and constant contradiction.

Wherever you go, take this perfectly curated & proportioned collection of a gifted French poet alongside. He is the voice of warmth & music softly playing on a quiet afternoon. Said Frank O’Hara, ‘My heart is in my/pocket. It is Poems by Pierre Reverdy.’ So take it with you & fall in love.

The great Pierre Reverdy, comrade to Picasso and Braque, peer and contemporary of Wallace Stevens and William Carlos Williams, is among the most mysteriously satisfying of twentieth-century poets, his poems an uncanny mixture of the simple and the sublime. Reverdy’s poetry has exerted a special attraction on American poets, from Kenneth Rexroth to John Ashbery, and this new selection, featuring the work of fourteen distinguished translators, most of it appearing here for the first time, documents that ongoing relationship while offering readers the essential work of an extraordinary writer.


Translated from the French by:

Pierre Reverdy (1889–1960) was born in Narbonne in the south of France. At age twenty-one he moved to Paris and became close friends with the artists and writers around Montmartre, particularly with the poets Max Jacob and Guillaume Apollinaire and the painter Juan Gris. During this time, he converted to Catholicism, founded the seminal literary magazine Nord-Sud, married the seamstress Henriette Charlotte Bureau, and began a deep and intimate friendship with Coco Chanel that would last for the rest of his life. In 1926, after publishing several books of poetry that included collaborations with Gris, Picasso, and Georges Braque, he moved with his wife to the village of Solesmes to be near the Benedictine monastery at St. Peter’s Abbey. During the Nazi occupation, he joined the Resistance, refused to publish anything, and wrote the excruciatingly brutal Le Chant de morts (Song of the Dead) that was eventually published in 1948 with illustrations by Picasso. Besides a few trips around Europe and Greece, Reverdy remained in Solesmes for the rest of his life, ever more estranged from society and from his own faith.

Mary Ann Caws is Distinguished Professor of Comparative Literature, English, and French at the Graduate School of the City University of New York and a Fellow of the American Academy of Arts and Sciences. She is the author of dozens of books, including Glorious Eccentrics: Modernist Women Painting and Writing, The Surrealist Look, and Surprised in Translation; the editor of the Yale Anthology of Twentieth-Century French Poetry; and the translator of, among many others, André Breton, René Char, Robert Desnos, Paul Eluard, Ghérasim Luca, Stéphane Mallarmé, Jacques Roubaud, and Tristan Tzara.

“The great Pierre Reverdy, comrade to Picasso and Braque, peer and contemporary of Wallace Stevens and William Carlos Williams, is among the most mysteriously satisfying of twentieth-century poets, his poems an uncanny mixture of the simple and the sublime.” —The Poetry Foundation

“Pierre Reverdy is among the greatest of modern French poets, and certainly among the most elusive. His work is at once impersonal and intimate, crystalline and opaque, simple to the point of austerity. The landscape of his poetry is both instantly recognizable and, devoid of local specificity, imbued with an otherworldly strangeness. He is ‘a secret poet for secret readers,’ as Octavio Paz once described him, insisting on the necessity of parsing the silence, the empty spaces between what seems visible in the lines of his poems. Each feels like a fragment of a universe, and yet whole.” —Mary Ann Caws on Pierre Reverdy for Poetry Society of America

"A poem by Reverdy is a spiritual fact: everything that makes up the human being--sensations, feelings, other men and women--has been passed through the filter of poetry."  —Octavio Paz

“Reverdy, with Paul Eluard...is the purest of the writers of his time.” —Philippe Soupault