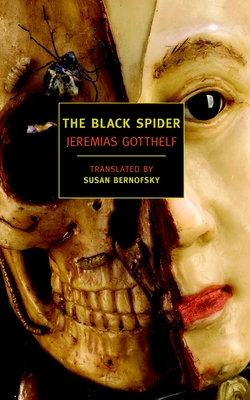 It is a sunny summer Sunday in a remote Swiss village, and a christening is being celebrated at a lovely old farmhouse. One of the guests notes an anomaly in the fabric of the venerable edifice: a blackened post that has been carefully built into a trim new window frame. Thereby hangs a tale, one that, as the wise old grandfather who has lived all his life in the house proceeds to tell it, takes one chilling turn after another, while his audience listens in appalled silence. Featuring a cruelly overbearing lord of the manor and the oppressed villagers who must render him service, an irreverent young woman who will stop at nothing, a mysterious stranger with a red beard and a green hat, and, last but not least, the black spider, the tale is as riveting and appalling today as when Jeremias Gotthelf set it down more than a hundred years ago. The Black Spider can be seen as a parable of evil in the heart or of evil at large in society (Thomas Mann saw it as foretelling the advent of Nazism), or as a vision, anticipating H. P. Lovecraft, of cosmic horror. There’s no question, in any case, that it is unforgettably creepy.

Jeremias Gotthelf, the pen name of Albert Bitzius (1797–1854), was a Swiss pastor and the author of novels, novellas, short stories, and nonfiction, who used his writing to communicate his reformist concerns in the field of education and with regard to the plight of the poor. After the success of his first novel, Der Bauernspiegel oder Lebensgeschichte des Jeremias Gotthelf: Von ihm selbst beschrieben (The Peasants’ Mirror; or, The Life History of Jeremias Gotthelf: Described by Himself; 1836) the author adopted the name of the story’s protagonist. Among his major works to have appeared in English translation are The Black Spider; Ulric, the Farm Servant; and The Story of an Alpine Valley.

Susan Bernofsky is the translator of six books by Robert Walser as well as works by Jenny Erpenbeck, Yoko Tawada, Hermann Hesse, Gregor von Rezzori, and others. The current chair of the PEN Translation Committee, she teaches at the Writing Program at Columbia University, where she is director of the Graduate Translation Program, and is at work on a biography of Walser.

"Gotthelf spins his horrifying tale patiently, serenely, with full confidence, it seems, that it will be strong enough to bear all the allegorical weight he can load on it. His confidence is justified. The Black  Spider is scary as hell, and the evil it portrays with such apparent simplicity seems, in the end, a more complex phenomenon than we might have thought….He does something only the best horror writers, and the best preachers, can do: he puts the fear of God in you." —Terrence Rafferty, The New York Times Book Review

“There is scarcely a work in world literature that I admire more.” —Thomas Mann

“The Black Spider was a horror story of its day, written by a Swiss pastor, Albert Bitzius, under the pseudonym of Jeremias Gotthelf. What distinguishes it from, say, the horror stories of Gotthelf’s contemporary, Edgar Allan Poe, is that Gotthelf firmly believed in the reality of the demon he created.... Gotthelf’s talent is to make his horror credible by the simplicity of his style and the acuteness of his psychological perception, particularly of the herd instinct among the villagers. His story is a homily, showing how the everyday moral weaknesses of men and women give an opening to the spirit of evil. Christine’s sin is not just in flirting with the Devil, but in thinking that she knows best.” —Piers Paul Read, The Times (London)

“Jeremias Gotthelf: with him I’m just like the woman in Heinrich Pestalozzi’s novel Lienhard und Gertrud who says ‘Your priest has driven me out of church!’ ” —Robert Walser

“Perhaps the psychological theories of Freud and Jung and the nightmare fantasies of Kafka had to be absorbed before the European imagination was ready for Gotthelf’s The Black Spider.” —Herbert Waidson, author of Jeremias Gotthelf: An Introduction to the Swiss Novelist

“Gotthelf’s writings are the utterance of the earnest life within and around him. He entered into the great mountain temple of nature, following within the veil such great high-priests as Wordsworth and Novalis. He is a true poet when he tells us in hushed voice of the hill-side storm, the relentless avalanche, the devastating torrent; or leads us rejoicing through the jubilant spring woods and grateful autumn fields. But his deepest interest lay in the human life which surrounded him, which spoke to him daily in dirge or psalm.” —The British Quarterly Review (1863)