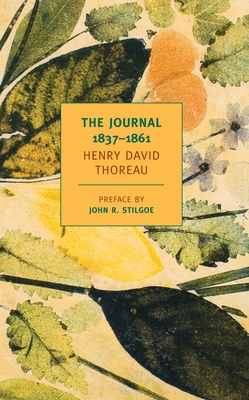 Open this book to any page, read any entry, and you will find a beautiful account of something Henry David Thoreau saw in nature once. From comparing the way ice clings to different types of trees to meditating on the behavior of frogs, fungi, and everything else, Thoreau’s journal will make you want to find the nearest patch of woods and sit in quiet observation of the amazing and diverse forms that life takes on our planet.

Thoreau was my companion during the early days of the pandemic, the only thing I could stick with. The way Thoreau moves through the seasons, day by day, the way he attends to the world -- having spent so much time with him, I think of him now as my friend. When I miss him, I open to a random page and pay him a visit.

Henry David Thoreau’s Journal was his life’s work: the daily practice of writing that accompanied his daily walks, the workshop where he developed his books and essays, and a project in its own right—one of the most intensive explorations ever made of the everyday environment, the revolving seasons, and the changing self. It is a treasure trove of some of the finest prose in English and, for those acquainted with it, its prismatic pages exercise a hypnotic fascination. Yet at roughly seven thousand pages, or two million words, it remains Thoreau’s least-known work.

This reader’s edition, the largest one-volume edition of Thoreau’s Journal ever published, is the first to capture the scope, rhythms, and variety of the work as a whole. Ranging freely over the world at large, the Journal is no less devoted to the life within. As Thoreau says, “It is in vain to write on the seasons unless you have the seasons in you.”

Henry David Thoreau (1817–1862) was born and lived the greater part of his life in Concord, Massachusetts. He studied at Harvard, where he became a disciple of Emerson, and after graduating in 1837 returned to Concord to teach school with his brother. In Concord, he became acquainted with the members of the Transcendentalist Club and grew especially close to Emerson, for whom he worked as a handyman. Thoreau also began to write for The Dial and other magazines, and in 1839 he made the boat trip that became the subject of his first book, A Week on the Concord and Merrimack Rivers (1849). On July 4, 1845, he moved into the hut he’d constructed on Walden Pond, where he remained until September 6, 1847—a sojourn that inspired his great work Walden, published in 1854. In the 1850s, Thoreau became increasingly active in the abolitionist cause, meeting John Brown at Emerson’s house in 1857 and, after the attack on Harpers Ferry, writing passionately in Brown’s defense. Short trips to Maine and Cape Cod resulted in two post humously published books (The Maine Woods and Cape Cod), and a visit to New York led to a meeting with Walt Whitman. Suffering from tuberculosis, Thoreau traveled to the Great Lakes for the sake of his health, but finding no improvement and realizing that he was going to die, returned home to Concord to put his papers in order and to write his final essays, drawing as always on the Journal, the work that was the source of all his other works and the defining undertaking of his adult life.

Damion Searls is a translator from German, French, Norwegian, and Dutch and a writer in English. His own books include What We Were Doing and Where We Were Going, The Inkblots, and The Philosophy of Translation. He received the Helen and Kurt Wolff Translator's Prize in 2019 for Uwe Johnson's Anniversaries.

John R. Stilgoe is the author of many books and the Robert and Lois Orchard Professor in the History of Landscape at Harvard University.

“...we are richer now that Damion Searls has unearthed new Thoreauvian treasures for the rest of us -- a 10th of the two-million-word journal, far more than ever before available in a single volume. Here, in some of the most vigorous and original prose in English, we find the origins of "Walden" and the other books, but we also find that the journal was a work of art in itself.” — Michael Sims, The Washington Post

"Writer, editor, and translator Searls selected passages from this vast sea of words to create the largest and most cohesive one-volume reader’s edition ever published...This is a superb and uniquely accessible edition of an essential American masterpiece." —Booklist

"Damion Searls has found and freed the lean, shapely and modern American classic inside the very definition of a 'baggy monster.'" —Christopher Lydon, Open Source Radio

"More than any previous version, it allows a direct encounter with this great work and approximates the experience of reading the whole. In fact, by clearing away some of the underbrush in the fourteen volumes, it highlights the better-known passages and uncovers hidden gems and significant connections." —Geoff Wisner, The Quarterly Conversation

“It is the unflagging beauty of the writing, day after day, that confirms its greatness among writers’ journals.” —Alfred Kazin

“Thoreau could lift a fish out of the stream with his hands; he could charm a wild squirrel to nestle in his coat; he could sit so still that the animals went on with their play round him. [In the Journal] we have a chance of getting to know Thoreau as few people are known, even by their friends.” —Virginia Woolf

“Reading Thoreau’s Journal I discover any idea I’ve ever had worth its salt.”—John Cage