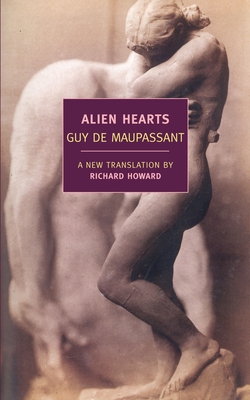 Alien Hearts was the last book that Guy de Maupassant finished before his death at the early age of forty-three. It is the most original and psychologically penetrating of his several novels, and the one in which he attains a truly tragic perception of the wounded human heart. André Mariolle is a rich, handsome, gifted young man who cannot settle on what to do with himself. Madame de Burne, a glacially dazzling beauty, wants Mariolle to attend her exclusive salon for artists, composers, writers, and other intellectuals. At first Mariolle keeps his distance, but then he hits on the solution to all his problems: caring for nothing in particular, he will devote himself to being in love; Madame de Burne will be his everything. Soon lover and beloved are equally lost within a hall of mirrors of their common devising.

Richard Howard’s new English translation of this complex and brooding novel—the first in more than a hundred years—reveals the final, unexpected flowering of a great French realist’s art.

Guy de Maupassant (1850–1893), journalist, novelist, poet, memoirist, playwright, and short-story writer, was one of the most notable men of letters of nineteenth-century France. He was born in Normandy to a middle-class family that had adopted the noble “de” prefix only a generation earlier. An indifferent student, Maupassant enlisted in the army during the Franco-Prussian War—staying only long enough to acquire an intense dislike for all things military—and then went on to a career as a civil servant. His entrée to the literary world was eased by Gustave Flaubert, who had been a childhood playmate of his mother’s and who took the young man under his wing, introducing him into salon society. The bulk of Maupassant’s published works, including nearly three hundred short stories and six novels, were written between 1880 and 1890, a period in which he also contributed to several Parisian daily newspapers. Among his best-known works are the novels Bel-Ami and Pierre and Jean and the fantastic tale “La Horla”; above all, he is celebrated for his stories, which transformed and defined the genre for years. In 1892, after attempting suicide to escape the hallucinations and headaches brought on by syphilis, Maupassant was committed to an asylum. He died eighteen months later.

Richard Howard was born in Cleveland in 1929. He is the author of fourteen volumes of poetry and has published more than one hundred fifty translations from the French, including works by Gide, Stendhal, de Beauvoir, Baudelaire, and de Gaulle. Howard received a National Book Award for his translation of Fleurs du mal and a Pulitzer Prize for Untitled Subjects, a collection of poetry.

“A novel containing such inconceivably beautiful sentences, I would have liked to memorize some. Its psychology sees to the very core of people and, in spite of that, touches them as if with the hand of a kindly old physician.” —Walter Benjamin

“Alien Hearts is perhaps the book that one likes Maupassant best for. The author’s conception of love has sublimed itself into very nearly the true form of
the Canticles and Shakespeare.” —George Saintsbury

“Maupassant is the world’s most accomplished of narrators.” –Joseph Conrad

“[Maupassant] is so relentlessly artistic that he puts the fear of philosophy in your heart.” –The New York Times

"This is classic Maupassant, beautifully rendered by Howard." –Harper’s