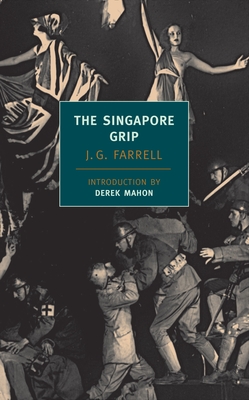 Singapore, 1939: life on the eve of World War II just isn't what it used to be for Walter Blackett, head of British Singapore's oldest and most powerful firm. No matter how forcefully the police break one strike, the natives go on strike somewhere else. His daughter keeps entangling herself with the most unsuitable beaus, while her intended match, the son of Blackett's partner, is an idealistic sympathizer with the League of Nations and a vegetarian. Business may be booming—what with the war in Europe, the Allies are desperate for rubber and helpless to resist Blackett's price-fixing and market manipulation—but something is wrong. No one suspects that the world of the British Empire, of fixed boundaries between classes and nations, is about to come to a terrible end.

A love story and a war story, a tragicomic tale of a city under siege and a dying way of life, The Singapore Grip completes the “Empire Trilogy” that began with Troubles and the Booker prize-winning Siege of Krishnapur.

J.G.Farrell (1935–1979) was born with a caul, long considered a sign of good fortune. Academically and athletically gifted, Farrell grew up in England and Ireland. In 1956, during his first term at Oxford, he suffered what seemed a minor injury on the rugby pitch. Within days, however, he was diagnosed with polio, which nearly killed him and left him permanently weakened. Farrell’s early novels, which include The Lung and A Girl in the Head,have been overshadowed by his Empire Trilogy—Troubles, the Booker Prize–winning Siege of Krishnapur, and The Singapore Grip (all three are published by NYRB Classics). In early 1979, Farrell bought a farmhouse in Bantry Bay on the Irish coast. “I’ve been trying to write,” he admitted, “but there are so many competing interests—the prime one at the moment is fishing off the rocks… . Then a colony of bees has come to live above my back door and I’m thinking of turning them into my feudal retainers.” On August 11, Farrell was hit by a wave while fishing and was washed out to sea. His body was found a month later. A biography of J.G. Farrell, J.G. Farrell: The Making of a Writer by Lavinia Greacen, was published by Bloomsbury in 1999.

Derek Mahon was born in Belfast in 1941, studied at Trinity College, Dublin, and the Sorbonne, and has held journalistic and academic appointments in London and New York. He has received numerous awards, including the Irish Times/Aer Lingus Poetry Prize, the Irish Academy of Letters Award, the Scott Moncrieff and Aristeion translation prizes, and Lannan and Guggenheim fellowships. His Collected Poems were published in 1999 and Harbour Lights, a volume of new poetry, was published in 2006.

"A brilliant, complex, richly absurd and melancholy monument to the follies and splendours of Empire."
— Hilary Spurling

"[This] vivid, multi-dimensional portrait of Singapore…is a superbly constructed book, enjoyable on many different levels."
— The Sunday Times

"In Singapore…Farrell makes a heroic and memorable attempt to portray and understand not only the Japanese, but also the lives of the millions of poor, oppressed, displaced and dying whose destruction came about through no fault of their own, who were swept helplessly away by the tides of commercial interest and war."
— Margaret Drabble

"The author of the Booker Prize-winning The Siege of Krishnapur sets this brilliant work in Singapore in 1939, as an old English firm tries to cash in on the impending world war. A complex, often funny meditation on empire and other matters."
— Martin Levin, The Globe and Mail

"No writer has swallowed all of Singapore, from its stately colonial bungalows to its once opium-infested slums, with the verve and wit of the late J.G. Farrell, whose 1978 saga The Singapore Grip remains the great Singapore novel...Farrell's pungent aroma still fleetingly hovers over today's city...With his gentle wit Farrell captures the soul of Singapore: a polyglot Asian port, still partly under the sleepy sway of its British colonial past, and still lurching toward an uncertain future with a furious, irresistible energy."