The Invention of Morel (Paperback) 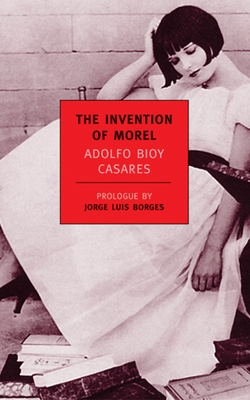 If you like the game Myst, and like thinking about the links between photographic representation, memory and desire (but also have a sense of humor), then you will love The Invention of Morel.

Like Robinson Crusoe for the nuclear/digital age, or the Island of Dr. Moreau (no coincidence the similarity in names there) but with an eye for the trajectory of modern technology that rivals Black Mirror (not to mention presaging it by 70 years!), this cryptic novella packs an outsize wallop and will worm its way into your brain guaranteed.

Jorge Luis Borges declared The Invention of Morel a masterpiece of plotting, comparable to The Turn of the Screw and Journey to the Center of the Earth. Set on a mysterious island, Bioy's novella is a story of suspense and exploration, as well as a wonderfully unlikely romance, in which every detail is at once crystal clear and deeply mysterious.

Inspired by Bioy Casares's fascination with the movie star Louise Brooks, The Invention of Morel has gone on to live a secret life of its own. Greatly admired by Julio Cortázar, Gabriel García Márquez, and Octavio Paz, the novella helped to usher in Latin American fiction's now famous postwar boom. As the model for Alain Resnais and Alain Robbe-Grillet's Last Year in Marienbad, it also changed the history of film.

Adolfo Bioy Casares (1914–1999) was born in Buenos Aires, the child of wealthy parents. He began to write in the early thirties, and his stories appeared in the influential magazine Sur, through which he met his wife, the painter and writer Silvina Ocampo, as well Jorge Luis Borges, who was to become his mentor, friend, and collaborator. In 1940, after writing several novice works, Bioy published the novella The Invention of Morel, the first of his books to satisfy him, and the first in which he hit his characteristic note of uncanny and unexpectedly harrowing humor. Later publications include stories and novels, among them A Plan for Escape, A Dream of Heroes, and Asleep in the Sun. Bioy also collaborated with Borges on an Anthology of Fantastic Literature and a series of satirical sketches written under the pseudonym of H. Bustos Domecq.

Suzanne Jill Levine is the author of numerous studies in Latin American literature and the translator of works by Adolfo Bioy Casares, Jorge Luis Borges, Guillermo Cabrera Infante, and Manuel Puig, among other distinguished writers. Levine’s most recent book is Manuel Puig and the Spider Woman: His Life and Fictions. She is a professor in the Spanish Department at the University of California, Santa Barbara.

Jorge Luis Borges (1899—1986), a giant in Latin American letters, wrote numerous books of poetry, fiction, and essays, and was a prodigious translator of authors  such as Kipling, Woolf, Faulkner, and Poe. He was a regular contributor to Victoria Ocampo’s journal Sur, and a frequent dinner guest of Silvina Ocampo and Bioy Casares. Over one of their legendary  conversations, the three friends came upon the idea of editing the Antología de la Literatura Fantástica, which was published in 1940.

"The masterpiece among Bioy Casares' short, intense novels is The Invention of Morel, a book that won raves from Borges (who placed it alongside Franz Kafka's The Trial), was called "perfect" by Octavio Paz, and inspired one of French cinema's most infamous moviesf, Last Year at Marienbad (1961). Though it was published in 1940, the book's continuing relevance was recently proven when it was featured on Lost — a cameo many viewers perceive as a key to that TV show's plot. But that doesn't mean this is a tough tract unfit for quality beach time... Just know that Morel is a poetic evocation of the experience of love, an inquiry into how we know one another, and a still-relevant examination of how technology has changed our relationship with reality. It's also a great read — one you'll be pressing into the hands of your fellow beach-goers." --Boldtype