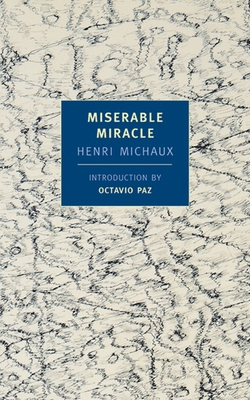 "This book is an exploration. By means of words, signs, drawings. Mescaline, the subject explored." In Miserable Miracle, the great French poet and artist Henri Michaux, a confirmed teetotaler, tells of his life-transforming first encounters with a powerful hallucinogenic drug. At once lacerating and weirdly funny, challenging and Chaplinesque, his book is a breathtaking vision of interior space and a piece of stunning writing wrested from the grip of the unspeakable.

Henri Michaux (1899–1984) was born in Namur, Belgium, the son of a lawyer. After contemplating careers in the church and in medicine, Michaux enlisted in the French merchant marine and traveled around the world. These travels inspired his first two books, Ecuador and A Barbarian in Asia. After settling in Paris, Michaux devoted himself to writing and painting and was soon known all around France—and eventually the world—for his work in both disciplines.

Octavio Paz (1914-1998) was born in Mexico City, and his extraordinarily busy and fruitful life took him from civil-war Spain to surrealist Paris, from US universities to the Mexican embassy in New Delhi, where he served for six years as ambassador before resigning in protest after his government’s suppression of student demonstrations at the 1968 Olympic Games. A great poet, Paz was also the author of many essays and a study of Mexican identity, The Labyrinth of Solitude, as well as the founder and editor of two important journals, Plural and Vuelta. Octavio Paz received the Nobel Prize for Literature in 1990.

Louise Varèse (1891–1989) was an American writer and translator. In 1969 she was designated a Chevalier de L’Ordre des Arts et des Lettres by the Republic of France in recognition of her translations of Baudelaire, Sartre, Proust, Michaux, and Bernanos, among other writers. She and her husband, the composer Edgard Varèse, were close friends of Georges Simenon during his years in the United States, and she translated some fifteen of his novels.