Everything Is Connected: Art and Conspiracy (Hardcover) 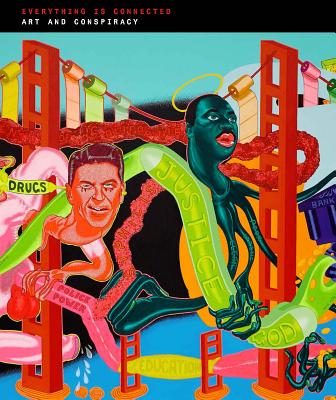 Shaped by events such as the assassination of John F. Kennedy, the Vietnam War, Watergate, the Iran-Contra affair, and 9/11, conspiracy theories have flourished and influenced our collective worldview. This provocative book examines how artists from the 1960s to the present explore both the covert operations of power and the mutual suspicion between governments and their citizens.  Featured are works by 30 contemporary artists—including Sarah Charlesworth, Hans Haacke, Rachel Harrison, Jenny Holzer, Mike Kelley, Mark Lombardi, Cady Noland, Trevor Paglen, Raymond Pettibon, Jim Shaw, and Sue Williams—in media ranging from painting, drawing, and photography to video and installation art.

Whether they uncover webs of deceit hidden in the public record or dive headlong into the paranoid fever dreams of the disaffected, artists examine the rhetorical strategies of conspiracy researchers and endeavor to expose evil in high places. Everything Is Connected elucidates the many ways in which artists use their work to take a powerful and proactive stance against the political corruption, consumerism, bureaucracy, and media manipulation that are hallmarks of contemporary life.

“The catalog has several fine essays, including one by Mr. Miller that outlines the persistence of conspiratorial thinking in American history, with the Masons in the 19th century and many groups after identified as malevolent powers that secretly rule our lives.”—Richard B. Woodward, Wall Street Journal