The Modern Bestiary: A Curated Collection of Wondrous Wildlife (Hardcover) 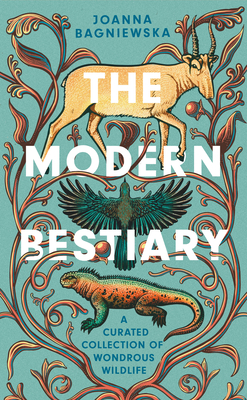 The Modern Bestiary: A Curated Collection of Wondrous Wildlife mirrors the medieval tradition of an encyclopedia of incredible beasts, only this charming book with ornamental illustrations features 100 real animals who are stranger than fiction. Organized by the elements Earth, Water, and Air, the book introduces both unfamiliar creatures, like deep-sea harp sponges who catch prey in their barbs and digest them whole, as well as ones that have made headlines, such as cicadas who emerge from the ground in noisy broods every thirteen or seventeen years. Step right up and meet these delightful, unbelievable, and deliciously horrific animals, including:

And the just plain weird:

Funny, entertaining, and illuminating, The Modern Bestiary is a book for anyone who wants to become more familiar with the natural world and all its astounding creatures.

JOANNA BAGNIEWSKA, a PhD in zoology from the University of Oxford, is a zoologist and science communicator, working as senior lecturer in Environmental Sciences at Brunel University London and a public engagement officer at the University of Oxford. She has studied a range of species, including wombats, mole-rats, jackals, and mink. Her academic interests include conservation biology, behavioral ecology, and the intersection of technology and zoology. She has collaborated with the Discovery Channel, won science communication competitions, and performed science stand-up comedy.

JENNIFER N. R. SMITH is an award-winning illustrator, visual artist, and director of WonderTheory Studio. In 2020, she completed her training in Medical Illustration with the Medical Artists Education Trust, receiving a distinction for her work, and became a fully certified member of the Medical Artist's Association.

PUBLISHERS WEEKLY
Starred Review. "Zoologist Bagniewska debuts with a brilliant tour of the animal kingdom’s oddities. ... Bagniewska offers concise and witty descriptions of 100 critters. There are roundworms who 'force ants into impersonating fruit,' a tarantula that 'keeps frogs as pets,' jellyfish that defy death, peacock mantis shrimp with eyes that are 'among the most complex in the animal kingdom,' foxes with ears so big they make up a third of their height, and butterflies that are 'able to make crocodiles cry, only to drink their tears.' Bagniewska admirably moves beyond trivia and delivers insights into ecology and evolution. ...Nature lovers will be eager to see what Bagniewska does next."

BOOKLIST
"The entries are quite funny and engaging, and readers will be fascinated by interesting features or ecological characteristics. ...Overall, the intriguing accounts of these 'beasts,' many of which are uncommon species, are worth the price of admission. ...The playful tone and fascinating facts smack of Mary Roach, and younger readers will appreciate both."

OBSERVER
"An illuminating compendium of some weird and wonderful creatures."

"It is in the corners of the Animal Kingdom where you will find odd ducks and duck-billed platypus. Joanna Bagniewska has done some impressive sleuthing as she compiled her best-hits list of eccentric animals for The Modern Bestiary, a splendid little guidebook to a menagerie of curious creatures.” ― Kirk Johnson, Sant Director, Smithsonian’s National Museum of Natural History

"Even after half a century - and counting - as a professional zoologist, I encountered new and intriguing facts on every page, all conveyed in an easy, friendly style. If ever there was a book that highlighted the bewildering wonders of the natural world, and the need for their conservation, this is it." ― Michael Brooke, author of Far from Land

"If you love animals, especially ones with unsavoury habits, this book is for you. Entries are crafted with affection, cast-iron scholarship and an unyielding dedication to exposing as much hilarious weirdness as the animal kingdom can offer. And that, it appears, is rather a lot. This is a book to adore." ― Tom Moorhouse, author of Elegy for a River

"This modern bestiary is a magnificent miscellany that will amuse and amaze. From butterflies that make crocodiles cry and penis-fencing slugs to fish that live inside sea cucumbers' bottoms - the natural world is stranger than you could ever imagine." ― George McGavin, entomologist, author and TV presenter

"The Modern Bestiary provides a fascinating, accessible and humorous insight into the wonders of the natural world. Packed with incredible facts and jaw-dropping insights into wildlife ecology, anatomy and behaviour, it is a genuine delight." ― Amy Dickman, director of Oxford University’s Wildlife Conservation Research Unit

"Just when you thought the natural world couldn't get any more bizarre, you turn the page and learn about a small marsupial that mates itself to death. There's plenty inside this beautifully written book to make you laugh, squirm and - perhaps most importantly - appreciate how lucky we are to not have to live inside an anus." ― Yussef Rafik, zoologist and wildlife TV presenter

"Gobbled it up in a day - from the very first paragraph of the introduction - this book is equal parts fascinating and utterly hilarious! Features some of the most ridiculous and downright impossible creatures that inhabit our planet. Bagniewska’s humorous and witty style is so entertaining. Not to mention the artwork is spectacular!" ― Agnes Monod-Gayraud, Winner of the Society of Authors’ Award for The Book of Bees