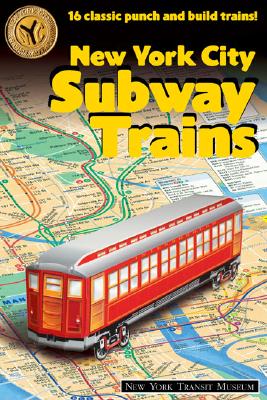 The New York City Subway system celebrates its 100th anniversary on October 27, 2004, but you can bring the romance of the old subway alive today with the Subway Punch-out Book. The book includes 15 easy-to-assemble punch-out train cars that are modeled after the historic old trains from the New York Transit Museum archives. The cars are printed on full-color laminated paper, with identifying historical information printed on the bottom of each. It's a fun book that sneaks in some fascinating history of America's first subway system, and it's the perfect gift for any New Yorker or New York-a-phile you might know

Ride the subway down memory lane with pictures of cars such as:

o The famous BMT D-Type, the best-loved and most fun to ride BMT car with its distinctive appearance inside and out

The New York Transit Museum is home to more than 100 years of transit lore and memorabilia. The museum's central facility is housed in an authentic 1930s subway station in Brooklyn Heights.