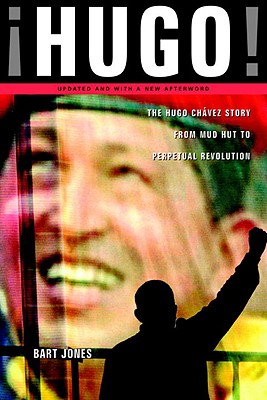 By Bart Jones
Unavailable, our apologies.
Out of Print

Ruling elites in Venezuela, the United States and Europe, and even Hugo Chávez himself though for different reasons, have been eager to have the world view him as the heir to Fidel Castro. But the truth about this increasingly influential world leader is more complex, and more interesting.. The Chávez that emerges from Bart Jones’ carefully researched and documented biography is neither a plaster saint nor a revolutionary tyrant. He has an undeniably autocratic streak, and yet has been freely and fairly re-elected to his nations presidency three times with astonishing margins of victory. He is a master politician and an inspired improviser, a Bolivarian nationalist and an unashamed socialist. His policies have brought him into conflict with the International Monetary Fund, the World Bank, and major oil companies. They have also provided a model for new governments and social movements in Ecuador, Bolivia, and Argentina. When in September 2006 he declared at the United Nations that ‘the devil came here yesterday … the President of the United States’, it was clear that he was taking on challenging the most powerful nation on earth, in conscious imitation of the Liberator, Simon Bolivar.

Bart Jones is currently a reporter for Newsday and worked for eight years in Venezuela, mainly a foreign correspondent for the Associated Press. A graduate of Fordham University, he holds a master’s degree in Social Studies from Columbia University. He has also reported for The Atlantic City Press in New Jersey, where he won awards from the Philadelphia Press Association. He lives with his family on Long Island. Hugo! is his first book.

“A refreshing departure from the ideologically charged tracts that tend to dominate the debate about Chávez.” – The (London) Sunday Times

Hugo! “is a book fully willing to do what American journalists mostly have avoided, which is to take Chávez seriously as a product both of local problems and of Latin American revolutionary traditions . . . It is also the most comprehensive of the available books on Chávez.” – Newsday


“Essential reading for anyone interested in understanding global – as well as Latin American – politics.” – The Tribune (UK)


"... stands as the most authoritative and best-researched among the new crop of studies.... The compelling story of Chavez's rise ... is scrupulously gathered and expertly assembled by Jones. He offers insight into the passion for justice...Jones also excels in providing sufficient historical context to understand Chavez's ideological formation." — Marc Cooper for Truthdig.com

"To understand Venezuela today you have to understand Venezuela B.C. - Before Chavez. . . . It is that rancid economic and political landscape that forms the backdrop of Chavez's rise. And it is masterly charted . . . in Bart Jones' comprehensive new biography.
Hugo-biographers too often resort to either stultifying hagiography or gratuitous demonization . . . Hugo! mark(s) an even-handed departure from that routine. . . . (Jones) displays an expert appreciation of the local milieu that formed Hugo's personality . . . One merit of Hugo! is that it cuts through the hysteria of the Chavez 'threat' to offer a . . . level-headed assessment. . . . Jones' well researched look at Chavez's vast social programs suggests a politician more motivated by common sense than communism." — Tim Padgett at Time.com

"Jones describes the story as 'straight out of Hollywood.' Indeed, I lost sleep two nights running because I just couldn’ t put the book down. I also was so engrossed in the two chapters about the 2002 coup that I got on the Washington, DC metro heading in the wrong direction and was in the suburbs before I became conscious of my surroundings. Despite the novel-like action pace of the book, it is meticulously researched with 55 pages of references and an extensive index. . . . Bart Jones is an ethical reporter who may come off as pro-Chavez because he is imposing objectivity in an area where the reporting has been so biased as to distort reality to the breaking point. Jones believes that both the opposition and the supporters of the Bolivarian “process,” as supporters have come to call it, have legitimate points that deserve to be discussed. One of his goals was to make that possible by writing a book which upholds the best standards of unbiased reporting. In the process he writes a 'page-turner' that will captivate and educate the reader. This book belongs on the New York Times bestseller list and in the hands of every intellectually curious US adult who questions the right of the United States to rule the world." — Chuck Kaufman

"Chávez's rise has a made-for-Hollywood quality. . . . Jones provides a superb description of the economic inequities that helped create the conditions for a populist such as Chávez to come to power. . . . As Hugo! points out, mainstream press coverage is often hostile to the Venezuelan president. . . . Where Jones truly excels is in his observations of Venezuelan society and the outsized role oil has played in molding the national character." — Washington Post (cover review)


"Jones's book is thoughtful, comprehensive . . . the best in the bunch." — The Boston Globe


"Without taking a political stance, Jones provides a nuanced account of the Venezuelan leader's life, creating a portrait that is, if not sympathetic, certainly more balanced than previous ones. Jones's precise and entertaining account moves smoothly through Chávez's beginnings up to his current position, making Venezuelan history accessible." — Publishers Weekly

"This first major English language biography of Hugo Chavez is a masterful achievement that finally puts this crucial Latin American figure of the early 21st Century into context within Venezuela, within Latin America, as well as internationally. Bart Jones has gotten hold of great detail and anecdote, and portrays a colorful leader in times of crisis, rising from low military rank to the zenith of national power, as Venezuela and its people — and Chavez himself — begin to take charge of the country's terrific oil reserves and to flex national muscle on the world stage. An important work for our era —Chavez will in all likelihood cast a long and significant political shadow in the Western Hemisphere for the foreseeable future, and we need to understand this complicated figure as events unfold." — Amy Wilentz