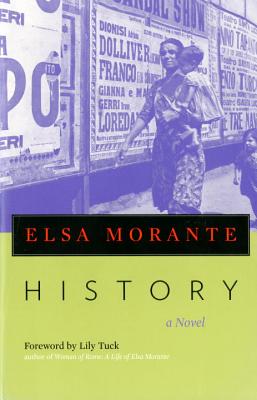 History was written nearly thirty years after Elsa Morante and Alberto Moravia spent a year in hiding among remote farming villages in the mountains south of Rome. There she witnessed the full impact of the war and first formed the ambition to write an account of what history - the great political events driven by men of power, wealth, and ambition - does when it reaches the realm of ordinary people struggling for life and bread.

The central character in this powerful and unforgiving novel is Ida Mancuso, a schoolteacher whose husband has died and whose feckless teenage son treats the war as his playground. A German soldier on his way to North Africa rapes her, falls in love with her, and leaves her pregnant with a boy whose survival becomes Ida's passion.

Around these two other characters come and go, each caught up by the war which is like a river in flood. We catch glimpses of bombing raids, street crimes, a cattle car from which human cries emerge, an Italian soldier succumbing to frostbite on the Russian front, the dumb endurance of peasants who have lived their whole lives with nothing and now must get by with less than nothing.

Elsa Morante was born in 1912 and raised in Rome. In 1941 she married the prominent author Alberto Moravia, whose anti-Fascist reputation forced them to flee the German occupation and hide in the mountains until the Liberation. During this time Morante began to write her first novel, House of Liars. She would complete three more major works during her career, winning the Premio Strega in 1957 for Arturo's Island. Her final novel, Aracoeli, earned her the Prix Medicis Etranger in 1985, the year of her death.

History "shows how war affects everyday people with no food, no information, no connections — nothing to hold on to . . . The gravity of it will forever travel with you." — O Magazine

"One of the few novels in any language that renders the full horror of Hitler's war, the war that never gets into the books . . ." -- Alfred Kazan, Esquire

"A storyteller who spellbinds." -- Stephen Spender, The New York Review of Books

"A marvel of a novel . . . all the pleasures that fiction can offer." -- Doris Grumbach, Saturday Review