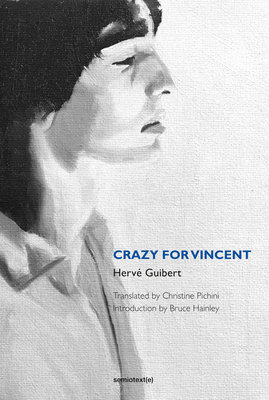 One of the most important voices of the AIDS crisis, Hervé Guibert tends to be remembered for his outspoken position on the disease in France before it killed him, as well as for being a close friend of Foucault. While most of his work is out of print in English, Guibert is well due for a renaissance. His smart, confessional writing worms its way into your heart. Crazy for Vincent is a perfect introduction. A sometimes too-real depiction of sexual obsession, this book has the kind of finely-wrought episodic prose that makes people fall in love with Maggie Nelson's Bluets, with the same ability to move you and make you weep if you're so inclined. I am, and did.

Crazy for Vincent’s short journal-like format allows for a quick read. It’s great if you want something obsessive and devastating, but you’re not fully ready to commit to digging yourself into a hole.

Maggie Nelson recently named this her favorite book no one has ever heard of. I thought about keeping its delicacy a secret with her, but I've never been good at keeping secrets. Devastating and damn near perfect.

In the middle of the night between the 25th and 26th of November, Vincent fell from the third floor playing parachute with a bathrobe. He drank a liter of tequila, smoked Congolese grass, snorted cocaine...
—from Crazy for Vincent

Crazy for Vincent begins with the death of the figure it fixates upon: Vincent, a skateboarding, drug-addled, delicate “monster” of a boy in whom the narrator finds a most sublime beauty. By turns tender and violent, Vincent drops in and out of French writer and photographer Hervé Guibert's life over the span of six years (from 1982, when he first met Vincent as a fifteen-year-old teenager, to 1988). After Vincent's senseless death, the narrator embarks on a reconnaissance writing mission to retrieve the Vincent that had entered, elevated, and emotionally eviscerated his life, working chronologically backward from the death that opens the text. Assembling Vincent's fragmentary appearances in his journal, the author seeks to understand what Vincent's presence in his life had been: a passion? a love? an erotic obsession? or an authorial invention? A parallel inquiry could be made into the book that results: Is it diary, memoir, poem, fiction? Autopsy, crime scene, hagiography, hymn? Crazy for Vincent is a text the very nature of which is as untethered as desire itself.

Hervé Guibert (1955–1991) was a writer, a photography critic for Le Monde, a photographer, and a filmmaker. In 1984 he and Patrice Chereau were awarded a César for best screenplay for L'Homme Blessé. Shortly before his death from AIDS, he completed La Pudeur ou L'impudeur, a video work that chronicles the last days of his life.

Bruce Hainley is the author of Under the Sign of [sic]: Sturtevant's Volte-Face and Art & Culture, both published by Semiotext(e). The editor of Commie Pinko Guy, he wrote, with John Waters, Art—A Sex Book. He cochairs the Graduate Art program at ArtCenter College of Design and is a contributing editor at Artforum.