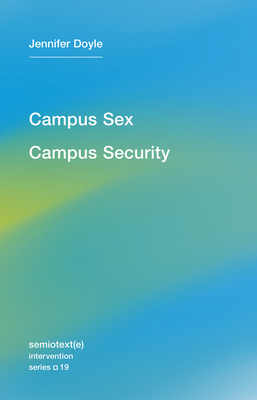 A clear-eyed critique of collegiate jurisprudence, as the process of administering student protests and sexual-assault complaints rolls along a Möbius strip of shifting legality.

The management of sexuality has been sewn into the campus. Sex has its own administrative unit. It is a bureaucratic progression.
—from Campus Sex, Campus Security

The psychic life of the university campus is ugly. The idyllic green quad is framed by paranoid cops and an anxious risk-management team. A student is beaten, another is soaked with pepper spray. A professor is thrown to the ground and arrested, charged with felony assault. As the campus is fiscally strip-mined, the country is seized by a crisis of conscience: the student makes headlines now as rape victim and rapist. An administrator writes a report. The crisis is managed.

Campus Sex, Campus Security is Jennifer Doyle's clear-eyed critique of collegiate jurisprudence, in the era of campus corporatization, “less-lethal” weaponry, ubiquitous rape discourse, and litigious anxiety. Today's university administrator rides a wave of institutional insecurity, as the process of administering student protests and sexual-assault complaints rolls along a Möbius strip of shifting legality. One thing (a crime) flips into another (a violation) and back again. On campus, the criminal and civil converge, usually in the form of a hearing that mimics the rituals of a military court, with its secret committees and secret reports, and its sanctions and appeals.

What is the university campus in this world? Who is it for? What sort of psychic space does it simultaneously produce and police? What is it that we want, really, when we call campus security?

Jennifer Doyle is Professor of English at the University of California, Riverside.