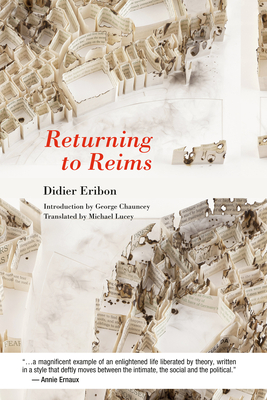 French sociologist Dider Eribon turns his gaze on his own childhood in this incredible, beautiful book, part memoir and part political philosophy. Eribon, who grew up gay and bookish in a working class French family which, once proudly communist, have deserted the left for the nationalist far right, examines the social consequences of late 20th century capitalist realism on the working classes, insisting on the importance of thinking about class if we want to understand the chaos of the present moment. It sounds heavy-going, but Returning to Reims has all the urgency of an addiction - I inhaled the whole thing in two subway rides.

A memoir and a meditation on individual and class identity, and the forces that keep us locked in political closets.

On thinking the matter through, it doesn't seem exaggerated to assert that my coming out of the sexual closet, my desire to assume and assert my homosexuality, coincided within my personal trajectory with my shutting myself up inside what I might call a class closet.
—from Returning to Reims

After his father dies, Didier Eribon returns to his hometown of Reims and rediscovers the working-class world he had left behind thirty years earlier. For years, Eribon had thought of his father largely in terms of the latter's intolerable homophobia. Yet his father's death provokes new reflection on Eribon's part about how multiple processes of domination intersect in a given life and in a given culture. Eribon sets out to investigate his past, the history of his family, and the trajectory of his own life. His story weaves together a set of remarkable reflections on the class system in France, on the role of the educational system in class identity, on the way both class and sexual identities are formed, and on the recent history of French politics, including the shifting voting patterns of the working classes—reflected by Eribon's own family, which changed its allegiance from the Communist Party to the National Front.

Returning to Reims is a remarkable book of sociological inquiry and critical theory, of interest to anyone concerned with the direction of leftist politics in the contemporary world, and to anyone who has ever experienced how sexual identity can clash with other parts of one's identity. A huge success in France since its initial publication in 2009, Returning to Reims received enthusiastic reviews in Le Monde, Libération, L'Express, Les Inrockuptibles, and elsewhere.

Didier Eribon, Professor of Sociology at the University of Amiens, is well known for his groundbreaking biography, Michel Foucault, first published in 1989. He is also the author of Insult and the Making of the Gay Self, as well as numerous other books of critical theory.

This is a beautiful book about suppression, losing touch with your roots, and regaining balance.—Art in America—