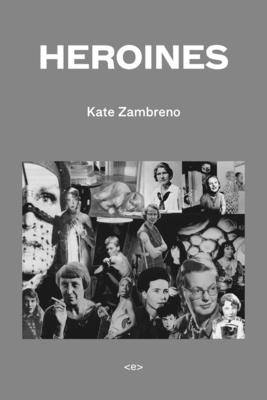 Were T.S. Eliot and F. Scott Fitzgerald misogynists or were they just overwhelmed? You tell me.

An urgent reclamation of the brilliant modernist women writers exploited and gaslit by fame-hungry men, this book-length essay crescendos with an inspiring thesis on how a new wave of writers are centering emotion, biography, and subjectivity to push forward the lineage of Zelda, Virginia, and Valerie. For anyone for whom Chris Kraus’s I Love Dick opened up the possibilities of form and expression.

A manifesto for “toxic girls” that reclaims the wives and mistresses of modernism for literature and feminism.

I am beginning to realize that taking the self out of our essays is a form of repression. Taking the self out feels like obeying a gag order—pretending an objectivity where there is nothing objective about the experience of confronting and engaging with and swooning over literature.”
—from Heroines

On the last day of December, 2009 Kate Zambreno began a blog called Frances Farmer Is My Sister, arising from her obsession with the female modernists and her recent transplantation to Akron, Ohio, where her husband held a university job. Widely reposted, Zambreno's blog became an outlet for her highly informed and passionate rants about the fates of the modernist “wives and mistresses.” In her blog entries, Zambreno reclaimed the traditionally pathologized biographies of Vivienne Eliot, Jane Bowles, Jean Rhys, and Zelda Fitzgerald: writers and artists themselves who served as male writers' muses only to end their lives silenced, erased, and institutionalized. Over the course of two years, Frances Farmer Is My Sister helped create a community where today's “toxic girls” could devise a new feminist discourse, writing in the margins and developing an alternative canon.

In Heroines, Zambreno extends the polemic begun on her blog into a dazzling, original work of literary scholarship. Combing theories that have dictated what literature should be and who is allowed to write it—from T. S. Eliot's New Criticism to the writings of such mid-century intellectuals as Elizabeth Hardwick and Mary McCarthy to the occasional “girl-on-girl crime” of the Second Wave of feminism—she traces the genesis of a cultural template that consistently exiles female experience to the realm of the “minor,” and diagnoses women for transgressing social bounds. “ANXIETY: When she experiences it, it's pathological,” writes Zambreno. “When he does, it's existential.” By advancing the Girl-As-Philosopher, Zambreno reinvents feminism for her generation while providing a model for a newly subjectivized criticism.

Kate Zambreno is the author of the novels Green Girl and O Fallen Angel as well as the nonfiction Heroines and Book of Mutter (both published by Semiotexte(e)).

The book is startlingly insightful.

Listed in "Books You Should Read"

Issues a powerful clarion call for a supportive community of female writers who will fixate on their own experiences without shame and reject the 'measuring rod' of the 'Great American (Male) Novelist.'

I was reading your book intensely for days and people started asking, 'Ok ok, what is this book?' What is this book you are so enraptured by? And I said, 'Well, it's a book I've been waiting for for a long time.' I am very excited it exists.

It should come as no surprise that her provocative new work, Heroines, published by Semiotext(e)'s Active Agents imprint next month, challenges easy categorization, this time by poetically swerving in and out of memoir, diary, fiction, literary history, criticism, and theory. With equal parts unabashed pathos and exceptional intelligence, Heroines foregrounds female subjectivity to produce an impressive and original work that examines the suppression of various female modernists in relation to Zambreno's own complicated position as a writer and a wife.

Intensity and intelligence forge the baseline current that runs through and characterizes most of Kate Zambreno's written work.

Heroines was named one of the 'Most Anticipated' Books of 2012.

For anyone interested in the present and future of literature, Heroines is required reading, and rereading.

Named one of the best books of 2012 by Laurie Penny in The New Statesman ('a lush, lyrical feminist memoir'), by Michele Filgate and Karolina Waclawiak at Salon, by Elissa Schappell at the Tin House blog, by Tobias Carroll at Vol. 1 Brooklyn, by Laura Pearson at Time Out Chicago, at The Nervous Breakdown, the ICA London blog, at Drawn&Quarterly bookstore, and by Verso Books.

In her third book, Heroines, a genre-defying battle cry about forgotten and suppressed women in literature (as well as her role in the gendered story of her own life), Zambreno's mirror is more relentless and reflective than ever. A scholarly treatise for readers who never cared about scholarship, and a memoir for those who have had enough with the insularity of simple confession, Heroines synthesizes the raw passion of a diary with the relevance and scope of nothing less than the history of literature. As 2012 nears a close, I'm hard-pressed to think of a book I've read this year that obsessed me more in the moment, rippled out as much into my daily life and conversations, or left more powerful aftershocks.

Heroines reads with an almost physical urgency, as though written in a hot, hot heat, as Zambreno tangles and untangles historic and fictional literary ladies (Emma Bovary, Nicole Diver), all while chronicling her own creative frustration as she trails her husband from one backwater academic post to the next, trying to dig herself out of her own alienated funk. It's totally smart, provocative, and oddly sexy.

Heroines is part literary criticism, part literary history, part memoir, part feminist polemic. In its form and in its writing, Heroines is what the author is trying to rescue and reclaim: to use Zambreno's favourite words, it's messy, girly, and excessive. It's also sharp, finely-structured, and meticulously (voraciously) researched.

Zambreno stages an impassioned encounter between the medicalised lives of Jane Bowles, Vivienne Eliot, Zelda Fitzgerald and other Modernist wives and mistresses and her own struggles as a young woman and a writer. The book sizzles with combative, confessional wit as she deconstructs the toxic strategies that Anglo-US culture uses to dismiss or erase 'the girl writing'. Brilliant and groundbreaking.

Heroines gives itself permission to be the kind of work of criticism that sometimes has tears in its eyes, that is a little red in the face by the end of the argument because it just loves the books so much; it is so invested. It is these qualities that make the book feel vast, voluptuous, while at the same time focused. It is heavily researched, sharply observed. It Takes Up Space but it does so on its own terms. And that Zambreno sets this example and does so boldly is, for me, one of the most exciting things about the work.

Zambreno doesn't write with the measured voice of someone who can count on being listened to, but with the wail of someone confined to a shed.

It is in her 'counterattack against this censorship; that Zambreno is at her most exhilarating and eviscerating: rightfully unashamed to acknowledge that it began from a position of anger, Heroines is rigorous and confident, fiercely intelligent in its demand for a fairer way of reading, writing and writing about women—past, present and future.

The book sizzles with combative, confessional wit as she deconstructs the toxic strategies that Anglo-US culture uses to dismiss or erase 'the girl writing'. Brilliant and groundbreaking.

An eloquent plea that diaries and other traditionally 'feminine' forms of writing be paid their due.