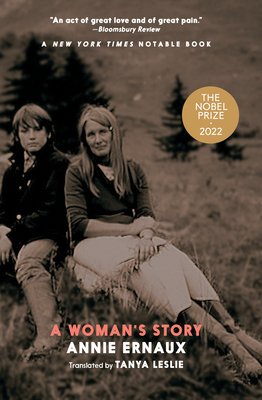 With no mother, what moors us to our past and future selves?

"A deeply affecting account of mothers and daughters, youth and age, and dreams and reality" (Kirkus Reviews)

Upon her mother’s death from Alzheimer’s, Ernaux embarks on a daunting journey back through time, as she seeks to "capture the real woman, the one who existed independently from me, born on the outskirts of a small Normandy town, and who died in the geriatric ward of a hospital in the suburbs of Paris."

She explores the bond between mother and daughter, tenuous and unshakable at once, the alienating worlds that separate them, and the inescapable truth that we must lose the ones we love. In this quietly powerful tribute, Ernaux attempts to do her mother the greatest justice she can: to portray her as the individual she was. She writes, "I believe I am writing about my mother because it is my turn to bring her into the world."

Born in 1940, ANNIE ERNAUX grew up in Normandy, studied at Rouen University, and began teaching high school. From 1977 to 2000, she was a professor at the Centre National d’Enseignement par Correspondance. Her books, in particular A Man’s Place and A Woman’s Story, have become contemporary classics in France. She won the prestigious Prix Renaudot for A Man's Place when it was first published in French in 1984. The English edition was a New York Times Notable Book and a finalist for the Los Angeles Times Book Prize. The English edition of A Woman’s Story was a New York Times Notable Book.

“Infinitely original. A Woman's Story is every woman's story. [Its] power rests not in the drama of its main event but in moments that might escape unnoticed, if not for a writer desperate to recapture every last image that her memory reluctantly yields of a lost loved one.” –New York Times Book Review

“[A] tender, tough and moving tribute to her mother's life and death … In this lovely short book Miss Ernaux attempts to explain—or, perhaps, merely to understand—the complex roots and blossoms of a mother/daughter relationship by describing the life of the mother she has just lost.” –Washington Times

“Nothing less than a minimalist revelation, a piece of writing so spare and sharp that it cuts straight to the heart with the accuracy of a surgeon's scalpel.” –Los Angeles Reader

“[An] unadorned and powerful novel—with the calm and honesty that follow deep grief and reflection.” –Booklist

“Somewhere along the way, and without losing the impact of specific details, A Woman's Story transcends the individual. Ernaux finds the truth of her mothers life, and it turns out to be not one thing, but the whole story.” –St. Petersburg Times

“An act of great love and of great pain.” –Bloomsbury Review