A Civilian's Guide to the U.S. Military: A comprehensive reference to the customs, language and structure of the Armed Fo rces (Paperback) 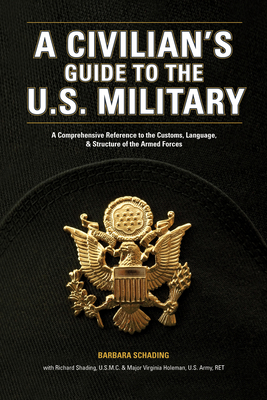 Does a corporal have to salute a lieutenant or is it the other way around? What are forward-deployed units? Is an "armored cow" a type of tank or something soldiers eat? Are Polaris missiles dropped from the air or launched from a submarine? If someone calls you a "Cat 4" should you be honored or offended?

Do you feel lost when it comes to all things military? Sure, you hear things on the news and maybe you know someone who is in the military, but you probably have a hard time fully grasping the acronyms, equipment, and protocol they discuss. That's where A Civilian's Guide to the U.S. Military can help. Author Barbara Schading decodes all things military for you. She discusses each branch—Army, Navy, Marines, Air Force, and the Coast Guard—in simple terms you can understand. You'll get the background information, an easy-to-read chart showing rank and insignia, and an explanation of the organization of each branch.

In addition, the book has extensive glossaries that cover terms, acronyms, slang, and equipment. You'll find an entire chapter that covers special operations forces like the Green Berets, Force Recons, Army Rangers, and more. You'll learn about their specific training, missions, and history. The book also covers other important aspects of the military like:

• flag and saluting etiquette
• military funerals
• the Tombs of the Unknown
• the American Legion, USO, Veterans of Foreign Wars, and other groups
• military law
• military academies
• medals and decorations
• official military music
• an explanation of the Geneva Convention
• and a list of resources to help you find more information


So the next time you read the paper or talk with a new recruit, you don't have to feel lost. Become a knowledgeable civilian with the help of A Civilian's Guide to the U.S. Military.

Dr. Barbara Schading is a research scientist with more than 15 years of technical writing experience. Her husband, Richard Schading, is a former Marine who served in Vietnam, and her sister, Virginia Holeman, is a retired Major in the Army.