WikiLeaks and the Age of Transparency (Paperback) 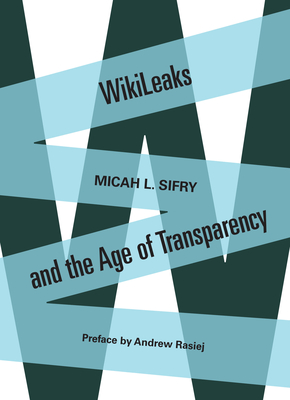 The United States government is diligent—some might say to the point of obsession—in defending its borders against invaders. Now we are told a small, international band of renegades armed with nothing more than laptops presents the greatest threat to the U.S. regime since the close of the Cold War. WikiLeaks' release of a massive trove of secret official documents has riled politicians from across the spectrum. Even noted free–speech advocate Floyd Abrams blames WikiLeaks founder Julian Assange for the certain defeat of federal shield–law legislation protecting journalists. Hyperbole, hysteria? Certainly. Welcome to the Age of Transparency.

But political analyst and writer Micah Sifry argues that WikiLeaks is not the whole story: It is a symptom, an indicator of an ongoing generational and philosophical struggle between older, closed systems, and the new open culture of the Internet. Despite Assange's arrest, the publication of secret documents continues. As Sifry shows, this is part of a larger movement for greater governmental and corporate transparency: "When you combine connectivity with transparency—the ability for more people to see, share and shape what is going on around them—the result is a huge increase in social energy, which is being channeled in all kinds of directions."

Micah L. Sifry is a writer, editor and democracy activist. Since 2004, he has been the co-founder and editorial director of Personal Democracy Media. In addition to co-founding Civic Hall last year, he is also a senior adviser to the Sunlight Foundation and serves on the boards of Consumer Reports and the Public Laboratory for Open Technology and Science. He is the author or editor of eight books, most recently A Lever and a Place to Stand: How Civic Tech Can Move the World and The Big Disconnect: Why the Internet Hasn’t Changed Politics (Yet), and in the spring of 2012 taught “The Politics of the Internet” at Harvard’s Kennedy School. He lives with his family in Hastings-on-Hudson, NY.

Praise for WikiLeaks and the Age of Transparency

"An absorbing, comprehensive examination of one of the most vital issues of our time." —Publishers Weekly

"It's not a dig–up–the–dirt–on–Julian–Assange volume . . . In this work, Sifry examines other fronts in the battle for openness." —Mother Jones

"The effects of the ongoing WikiLeaks are cumulative––sort of like mercury poisoning––and reveal much about how dreadful many of our policies, especially regarding the war in Afghanistan, have been. With insight and clarity, Micah Sifry explores the red–hot spot where politics and the Internet intersect. An indispensable resource for the future fight over secrecy and openness." —Arianna Huffington

"A leading participant in and observer of how the Internet is changing politics and society, Micah Sifry has given us a riveting, from–the–trenches report on how the clash between power, truth, access, transparency and small–d democracy is unfolding in our newly hyper–networked world. Inspired by WikiLeaks and the urgent debates that have been ignited by that phenomenon and its founder, Sifry explores the rise of the transparency movement in the US and around the world. This is a fascinating, trenchant and personal guide for smart, engaged people who seek to understand the new realities of this age of transparency." —Katrina vanden Heuvel

"Micah Sifry doesn't just know WikiLeaks. He sees how it relates to everything from the Obama's victory to the Tea Party's appearance to electoral politics in Croatia, and he uses his incredible breadth of experience to show us how WikiLeaks is part of a large, long–term trend in favor of the spread and visibility of information about our world, including information people often don't want shared." —Clay Shirky

"Just one piece of a much larger story of how the people and the powerful relate to each other: That's how Micah Sifry sees WikiLeaks. By studying so carefully how technology is changing politics, he's been preparing for years to write this book. We should be grateful that he actually did." —Jay Rosen, Professor of journalism, New York University; author of PressThink.org