Rats: Observations on the History & Habitat of the City's Most Unwanted Inhabitants (Paperback) 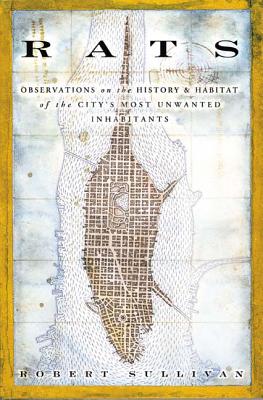 Behold the rat, dirty and disgusting! Robert Sullivan turns the lowly rat into the star of this most perversely intriguing, remarkable, and unexpectedly elegant New York Times bestseller.

Love them or loathe them, rats are here to stay-they are city dwellers as much as (or more than) we are, surviving on the effluvia of our society. In Rats, the critically acclaimed bestseller, Robert Sullivan spends a year investigating a rat-infested alley just a few blocks away from Wall Street. Sullivan gets to know not just the beast but its friends and foes: the exterminators, the sanitation workers, the agitators and activists who have played their part in the centuries-old war between human city dweller and wild city rat.

Sullivan looks deep into the largely unrecorded history of the city and its masses-its herds-of-rats-like mob. Funny, wise, sometimes disgusting but always compulsively readable, Rats earns its unlikely place alongside the great classics of nature writing.

With an all-new Afterword by the author

Robert Sullivan is the author of Rats, The Meadowlands, A Whale Hunt, and most recently, The Thoreau You Don't Know. His writing has appeared in The New Yorker, The New York Times, New York, A Public Space and Vogue, where he is a contributing editor. He was born in Manhattan and now lives in Brooklyn, New York.


"… a rollicking, richly drawn history…[he] offers up a parade of eccentric characters who deserve to be in the movies."

"[Approaches] his fleet-footed, fast-food-loving quarry with a naturalist's curiosity and a storyteller's fluency."

"The author excels at fluid and witty prose."

"Sullivan persuasively associates the 'truth' he learns about rats with a deeper understanding of both the history of New York City and the essence of mankind."

"Rats will both entertain and edify you about a part of the world you never thought much about."

"Sullivan beguiles us with remarkable tales about an inexhaustible topic."

"Who knew a book about one of nature's most reviled creatures could make such great bedside reading?"