WORKac: We'll Get There When We Cross That Bridge (Hardcover) 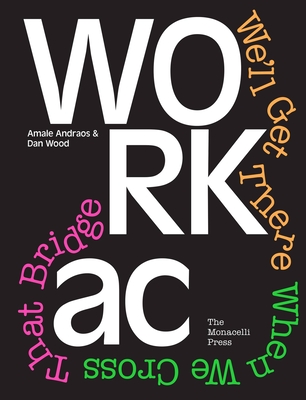 By Amale Andraos, Dan Wood
$50.00
This book is out of stock indefinitely, unable to order at this time.

This book surveys the projects that define WORKac (WORK Architecture Company) as one of the most progressive and playful architecture firms in practice today.

WORKac: We’ll Get There When We Cross That Bridge traces fifteen years of collaboration between architects Amale Andraos and Dan Wood. Structured as a conversation between the two partners, the book alternates between explorations of seminal projects and discussions framing a series of issues that are key to their work. The book follows the firm’s career over the course of three Five-Year Plans (Say Yes to Everything, Make No Medium-Sized Plans, Stuff the Envelope), examining the relationships between work and life, and the limits and opportunities of collaborative creativity and practice.

WORKac has achieved international acclaim, winning design competitions in Russia, Gabon, and China, and in 2015 the practice was named the 2015 AIANY State Firm of the Year. Showcasing projects for MoMA PS1, Edible Schoolyards NYC, Anthropologie, Diane von Furstenberg, Creative Time, and many more, the book is a tasting menu of everything the practice embraces: never assuming what architecture “is” but always imagining together what it can become. From residential interiors to futuristic masterplans of ecological cities, WORKac samples the wide spectrum of their critical, witty, and dialogued work.

WORKac (WORK Architecture Company) founding partners Dan Wood, raised in Rhode Island, and Beirut-born Amale Andraos joined forces personally and professionally in 2003. The firm has achieved international acclaim and was named the 2015 New York State Firm of the Year. Andraos and Wood have taught and lectured extensively, and in 2015 Andraos was appointed Dean of Columbia University's Graduate School of Architecture, Planning and Preservation. Their previous publications include Above the Pavement—the Farm! and 49 Cities.

"It is precisely the constant interweave of the creative and bureaucratic aspects of their work, raising a family, the public roles of two intellectuals and teachers... that makes this book a fundamental reference for understanding architecture in 2018."
—Abitare

"Lively, colorful graphics and an interesting, conversational writing style are combined with glossy photos of unbuilt and built work around the globe. Andraos and Wood take you from their first project—a doghouse—to a sustainable 'green house,' and, most recently, a library in Queens."
—Architectural Record

"Architecture is hardly a solo sport, and the duo call their latest book, We’ll Get There When We Cross That Bridge, a collaborative 'duograph,' featuring a running, conversational dialogue between them. While the title and the playful graphic design suggest a freewheeling m.o. of winging it, scribbling notes in the margins and coloring outside of the lines, the partners make a strong case for making goals and taking stock of them, even when the path isn’t a straight shot, as it rarely is."
—Fast Co.Design

"Structures and concepts that are delightfully fresh and sometimes irreverent are hallmarks of this New York firm... WORKac's trademark playfulness extends to the design of the book itself, a bravado act of juggling a variety of typefaces, paper stocks, and even page sizes."
—Interior Design

"The duo establishes an engaging and refreshingly off-the-cuff repartee while discussing wide-ranging projects such their passive Arizona House."
—Metropolis Online

"Fun for all ages – and serious enough to work in this age."
—ArchNewsNow

Irreverent yet impeccably relevant, WORKac has developed an approach to architecture that engages the most pressing issues of our time, from food supply to environmental design. For Amale Andraos and Dan Wood there is no contradiction between urgency and pleasure. Their designs consistently straddle disciplines and fields as they offer spaces and images opening new possibilities for public architecture at every scale, whether the local library or new types of cities.
—Barry Bergdoll, Museum of Modern Art and Columbia University

This exceptional book unfolds like the process of innovation itself. Rightfully deemed a “duograph” by the collaborative team of Dan Wood and Amale Andraos, the narrative flows like a family dialogue—sliding, pausing, reversing and ultimately flowing into an amazing series of architectural ideas. Turning its pages is an instructive revelation and a celebratory confirmation of what it takes to deserve being called “truly creative.”
—James Wines, SITE

Joyful and non-dogmatic, the architecture of WORKac has an optimism that hasn’t been seen much since the rise of Postmodernism. But its aspirations are wholly contemporary: to blend the unruliness of the global metropolis and the serenity of an ecological paradise, without diluting the qualities of either.
—Nicolai Ourossoff, architecture critic

WORKac’s brave duograph interweaves personal narratives, conversations, and anecdotes about growing a global office and negotiating each other’s creative input, all while teaching, leading, and writing. This duo’s north star in architecture, as in life, is enduring with hope as well as with humor.
—Ana Miljacki, Associate Professor of Architecture, MIT

As with their projects, all aspects of this book reflect a collaborative partnership and a synergy of creative minds. Going forward in these times requires vision and ambition and a lot of hard work in the service of humanity. WORKac—where work is more fun than fun!
—Chip Lord, Ant Farm