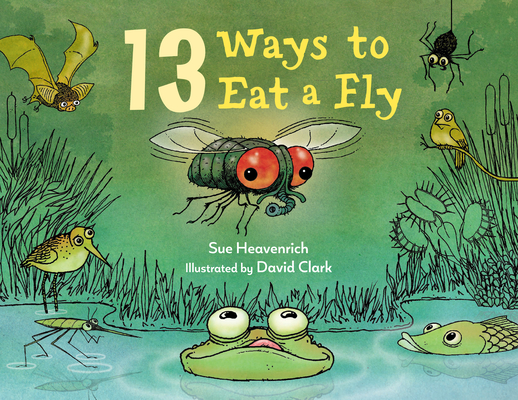 Science meets subtraction in this fresh and funny STEM picture book with plenty of ewww factor to please young readers. A swarm of thirteen flies buzzes along, losing one member to each predator along the way. Whether the unfortunate insects are zapped or wrapped, liquefied or zombified, the science is real--and hilariously gross. Includes a guide to eating bugs, complete with nutritional information for a single serving of flies.

Sue Heavenrich has eaten flies--small ones and mostly by accident. She has also done research on ants, bees, and spiders, and taught cockroaches how to run mazes. After earning her MS in biology and teaching high-school science, Sue began writing about science and nature in magazines, newspapers, and blogs. She is the author of several books, including Diet for a Changing Planet: Food for Thought, a book for teens about how to save the world by eating bugs, weeds, and invasive species.

David Clark is the illustrator of many books for children, including Never Insult a Killer Zucchini; What's for Dinner? Quirky, Squirmy Poems from the Animal World; and the Just Like Us! series. He is also the illustrator and co-creator of the syndicated comic strip Barney & Clyde.

♦ Guess who’s coming to dinner? Well stocked with easy-to-digest facts, from nature notes (“The frog closes its eyes and swallows, using its eyeballs to push the fly down its throat”) to the taxonomic names of the 13 different kinds of flies that Clark renders with distinguishing details (and deservedly anxious expressions) in his cartoon illustrations, this disquisition on flies as food will draw swarms of young readers. Following a countdown entrée in which the said baker’s dozen are, one by one, gobbled up by predators ranging from birds, bats, and a fly-eating fungus to an unwary skateboarder (gross but, claims Heavenrich, “harmless”), subsequent courses dish up observations on the insect’s importance as a food source, its real potential as a food additive, its nutritional content (with a table modeled after the one printed on cereal boxes), and a labeled chart of fly body parts, from the “soft and chewy” abdomen to antennae (“high in fiber”). Budding STEM-winders especially will relish meaty closing lists of print and web resources. Amplify the buzz by pairing this biological bounty with Brigit Heos’ introduction to another segment of the life cycle, What to Expect When You’re Expecting Larvae, illustrated by Stéphane Jorisch.
—Booklist, starred review


Counting insect corpses has never been so much fun. Thirteen species of flies and gnats meet their untimely demises as they’re devoured by amphibians, fish, birds, plants, other insects, and more. The structure of the book is deceptively simple: Each doomed insect is described by a single participle (which rhymes with the participle that describes the next) along with a comical cartoon of each fly’s passing. As each fly bites the dust, a small note identifies the species by its common and scientific names. The plot becomes more sophisticated with a brief paragraph that explains how and why each fly was eaten. As there are 13 flies, the final death doesn’t have a rhyme, but it discusses flies as food for humans (with the assumption that readers do not belong to cultures that currently include insects in their diets) and how food scientists may be looking toward the insect world for alternate protein sources. The format allows readers across different age ranges to enjoy the book either for the simple rhymes (and visual zest) or for the intriguing study of the food web. A select bibliography includes books, websites, and news stories that will entice curious readers looking to learn more. Fans of Ants Don’t Wear Pants! (2019) and Kevin McCloskey’s other graphic novels will appreciate the illustrations and humor of this unusual counting book.
Fly out and buy it.
—Kirkus Reviews


Thirteen short, rhyming answers are given to this question: How do birds, fish, mammals, and insects capture and eat flies? Some of these feeding methods are described as “zapped,” “wrapped,” and “underground.” Each of these tactics is explained in a descriptive paragraph of two or three sentences that centers on a specific animal and how it eats flies. For example, a garden spider captures a fly in its web, injects its prey with poison, and then wraps it in silk so that it resembles a burrito. Each paragraph is accompanied by a large illustration or two. These colorful illustrations are clear, but often humorously exaggerated. The text concludes that flies are a major food source for many animals. Educators could use this book for multiple lessons. The rhyming “ways” to eat a fly could be adopted for choral reading, with some of the factual information also included. Children could discuss how different animals capture and eat flies as food. VERDICT A lighthearted nonfiction picture book that could easily be used with young children in different ways.
—School Library Journal


There are 120,000 different kinds of flies, all of which have predators ready to devour them. But before the flies go down the hatch, they have to be caught, and that's the focus of this humorous and informative look at food preparation on the fly. The book does a countdown of thirteen different methods: frogs use their tongues to zap them; crab spiders snatch them with their long front legs; garden spiders employ a two-step process, first killing flies with venom and then wrapping them up "like a burrito." Trout wait until baby flies, or midges, hatch just above the water's surface and then simply leap and gulp. Clark's bright, digitally colored creatures, with exaggerated facial expressions, set the tone; visual humor abounds, including hte recurring lineup of different species of fly that decreases by one as the countdown progresses. A witty text culminates with equally amusing back matter, from a food label listing nutritional information (one serving: 65-80 flies, "depending on species") that accompanies a tongue-in-cheek guide to fine fly dining, to a diagram labeling the edible parts of a fly. Appended with further reading and websites for children and a bibliography of sources. Bon appetit!
—The Horn Book