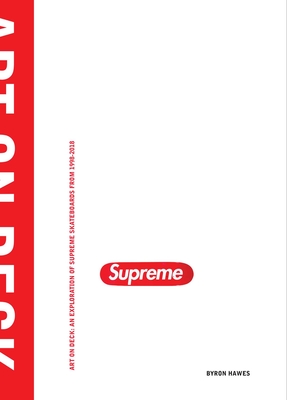 An invaluable resource, Art on Deck represents the most cohesive examination to date of Supreme's skateboard output.

For 25 years, Supreme's skateboard collaborations have represented an iconic intersection between art and skate culture, ultimately birthing an entire culture of skateboard art. This book features original images of all decks, including ultra-rare and unreleased pieces such as the "LV" Cease-and-Desist series, the "Japan-only Jesus," and the Louis Vuitton x Supreme trunk, from the world's only complete collection, as well as "in-the-field" shots from noted photographers including Los Angeles-based @baariksgallery and Johannesburg's I See A Different You.

Byron Hawes is a writer, designer, and curator who splits time between NYC, LA, and Shanghai. He is the founder and editor of the underground design magazine The Après Garde, and co-founder of I-V, a boutique architecture and design firm that has done projects including a recording studio and offices for OVOsound, Campari's Canadian HQ, and Spin.

Additionally, he has authored the books Drop, We Are Wanderful, Modern Tropical, Façades, and others.

I See A Different You is a collective of visionary creatives born and bred in Soweto, South Africa. Co-founded by Fhatuwani Innocent Mukheli and Vuyo Mpantsha, their aim is to bring an alternative view of South Africa to a global audience, demonstrating the South African experience, and their love and optimism for the people they share their country with.

They have served as Nikon's Ambassadors for Africa, the faces of Scottish Leader Whiskey, and shot music videos, editorials, and advertisements with the likes of Converse, South Africa Tourism, HBO, and a host of other clients and partners.

@baariksgallery is a Los Angeles-based photographer who has pioneered a new aesthetic in contemporary film photography. His work shows emotion through cinematic framing and locations, in order to construct seamless visual narratives.

Preferring to shoot at night, Baariks shapes light in order to explore the shadows inherent in power and lust. His oeuvre combines high fashion, musicians, and eroticism; culminating in a story that has enticed a rabid Instagram following, and a host of editorial works.

AS SEEN IN: Christie's, HYPEBEAST and Robb Report.