War Is Beautiful: The New York Times Pictorial Guide to the Glamour of Armed Conflict* (Hardcover) 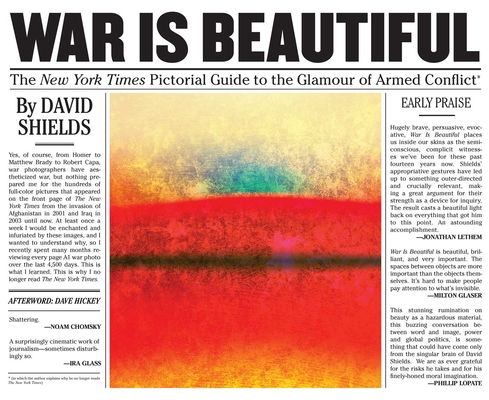 Bestselling author David Shields analyzed over a decade's worth of front-page war photographs from TheNew York Timesand came to a shocking conclusion: the photo-editing process ofthe "paper of record,"by way of pretty, heroic, and lavishly aesthetic image selection, pullsthe woolover the eyes of its readers; Shields forces us to face not only the the media's complicity in dubious and catastrophic military campaigns but our own as well.This powerful media mouthpiece, the mightyTimes, far from being a check on governmental power, is in reality a massive amplifier for its dark forces by virtue of the way it aestheticizeswarfare. Anyone baffled by the willful American involvement in Iraq and Afghanistan can't help but see in this book how eagerly and invariably theTimesled the way in making the case for these wars through the manipulation of its visuals. Shields forces the reader to weigh the consequences of our own passivity in the face of these images' opiatic numbing. The photographs gathered inWar Is Beautiful, often beautiful and always artful, are filters of reality rather than the documentary journalism they purport to be.

David Shields is the internationally bestselling author of 20 books, including Reality Hunger (named one of the best books of 2010 by more than 30 publications), The Thing About Life Is That One Day You’ll Be Dead (New York Timesbestseller), and Black Planet (finalist for the National Book Critics Circle Award). Forthcoming are Flip-Side (powerHouse, 2016) and Other People (Knopf, 2017). The recipient of Guggenheim and NEA fellowships, Shields has published essays and stories in the New York Times Magazine, Harper’s, Esquire, Yale Review, Village Voice, Salon, Slate, McSweeney’s, and Believer. His work has been translated into 20 languages.

Challenges the indisputable authority of the paper by claiming The Times has sanctified, eroticized and glamorized warfare.
—LENS CULTURE

Shields believes that the images the New York Times chooses set a tone for the rest of the media landscape, and that they can wreak havoc when it comes to an informed populace’s acceptance of the horrors of war.
—HOPES & FEARS

The disturbingly graphic book follows the New York Times' war reporting for more than a decade, exposing the institution's tendency to glamorize armed combat to the point of manipulation.
—THE VILLAGE VOICE

The images that populate War Is Beautiful are undeniably beautiful. Whether or not they're accurate portrayals of war is up to you.
—MOTHER JONES

Propaganda is alive and well and as brazen as ever, as author David Shields exposes in a damning book that points the finger squarely at one of the nation’s most influential media outlets.”
—WE HEART

Darkly beautiful and incisive.
—THE STRANGER

An examination of how the photography in the New York Times seeks to glorify combat.
—MODERN PAINTERS

War Is Beautiful is the ironic title of a beautiful new book of photographs . . . remarkable . . . powerful . . . There can be no question that Shields has captured a portrait of a day in the life of a war propagandist, and that the photographers, editors, and designers involved have done as much to cause the past 14 years of mass dying, suffering, and horror in the Middle East as has any single New York Times reporter or text editor.
—FOREIGN POLICY JOURNAL

Shields has crafted a unique visual antiwar polemic exploring the role of the media in shaping contemporary propaganda.
—PUBLISHERS WEEKLY

For us to be better “consumers” of the visual diet we are being served, we need to acquire the skills that Shields displays here. For any visual-literacy class, War Is Beautiful could serve as a textbook.
—JORG COLBERG, CONSCIENTIOUS

A surprisingly cinematic work of journalism—sometimes disturbingly so.
—IRA GLASS

Hugely brave, persuasive, evocative, War Is Beautiful places us inside our skins as the semi-conscious, complicit witnesses we’ve been for these past fourteen years now. Shields’ appropriative gestures have led up to something outer-directed and crucially relevant, making a great argument for their strength as a device for inquiry. The result casts a beautiful light back on everything that got him to this point. An astounding accomplishment.
—JONATHAN LETHEM

War Is Beautiful is beautiful, brilliant, and very important. The spaces between objects are more important than the objects themselves. It’s hard to make people pay attention to what’s invisible.
—MILTON GLASER

This stunning rumination on beauty as a hazardous material, this buzzing conversation between word and image, power and global politics, is something that could have come only from the singular brain of David Shields. We are as ever grateful for the risks he takes and for his finely-honed moral imagination.
—PHILLIP LOPATE

War Is Beautiful makes an incredibly strong argument, textually and visually. Wildly insightful, it makes me think about these things in ways I hadn’t before. I really can’t in any way imagine it being any better.
—KENNETH GOLDSMITH

This is an important and revealing re-contextualizing of the war photographs we are exposed to daily in the Times, images we absorb numbly in a glance. But David Shields looks closer. In this book, the ugly needs of our psyches (individual and collective) to make heroic, grand, and meaningful what is most petty, vile, and meaningless—about human nature, and male nature in particular—is laid so bare that we feel and feel outraged and cannot look away.
—SHEILA HETI

War Is Beautiful is timely, provocative, and disturbing. I’d previously considered some of the questions the book asks about war and beauty and aesthetics, but seeing these photos taken out of their original context (and perhaps this is their proper context), selected and collaged and framed and sequenced, is revelatory, powerful, and not a little bit beautiful, and all the more distressing for its beauty. This book comes at a crucial time in how we might rethink the role that a photograph can play in how we narrativize and make sense of world events. As a longtime reader of The New York Times, I’m forced by War Is Beautiful to rethink my relationship with the paper, which is more than most books do.
—ANDER MONSON

I first consciously apprehended how violence can look beautiful when Apocalypse Now came to the big screen—or, rather, I watched this movie feeling horrified, haunted, and in a dream, until I asked the woman beside me what she thought, and she replied, “It’s beautiful.” This would never have come from my mouth before. I had just seen brutality and atrocity; how could I say that those things were beautiful? But of course, they were, or could be made so. Unlike David Shields, I don’t feel called upon to renounce The New York Times for frequently presenting an aestheticized view of our self-defensive follies, imperialist misadventures, and unjust wars. But the images that he has curated and subcategorized until their candy coatings linger uneasily on the palate after we swallowed the rest do raise this question: Whose interest do they serve? When war becomes entertainment and invasion looks fun, who benefits? Shields has done an important thing in making this question so palpable.
—WILLIAM T. VOLLMANN

A work of perilous ambiguity. No one will go Don Quixote against the Times (aren’t we clever?), but Shields has. It’s quite an extraordinary task he has set for himself here by squarely taking on NYT war images—the aestheticization of horror. The trouble is that the glamour doesn’t go away. The quotes accompanying the pics become, effectively, orphans, because—whatever they say—you can’t unsee what you see. Shields is totally on point that the NYT is 1) our newspaper of Glorious Carnage, and 2) the soul of photography itself. Shields’ book is, woe unto all of us, beautiful, even while it shreds your soul in slo-mo.
—ANDREI CODRESCU

As Shields himself acknowledges, his reactions to the photos weren’t simple or straightforward. Neither are mine. War Is Beautiful is a great book.
—WHITNEY OTTO

War Is Beautiful is brilliantly destabilizing in the same way Reality Hunger is—startling works, necessary to the progress of culture.
—SARAH MANGUSO

David Shields always has the best ideas about what a book is or might be, what its function is, how it might fit into the culture. Almost alone among writers these days he’s an adventurer, putting together volumes that surprise and challenge and threaten us and deliver remarkable insights, intriguing new views of the world. Now he comes with a wonderful book of photographs and quotations—and a truly disruptive purpose. He has put together a dangerous and contemplative book that forces us to see behind the curtain at two great American institutions, government and journalism, wrapped in distressing embrace.
—FREDERICK BARTHELME

Absolutely right, fast, to the point, and guaranteed to stir things up.
—TIM PARKS

What bugs me most about the Times is how little we actually see. Nothing real is fit to print, apparently. I thought I was the only person who felt this way. This book is important. I’m grateful to Shields for doing it.
—ROSEMARY MAHONEY

I love the theme, the minimalism, the arrangement and selection of quotations (an art form many may not recognize as an art form). This hits me at the level where some of John Berger’s work hits me, which is very rare. A fantastic book. A heart-stopper.
—ANDY ROGERS

War Is Beautiful is a powerful and important work of visual poetry: its polemical challenge draws the reader, the viewer, the citizen into its sometimes mysterious, often confounding, always disturbing sinuosities.
—LAWRENCE WESCHLER

War Is Beautiful is an extraordinary and imaginative endeavor. The notion had occurred to me, as I’m sure it has to many others, that there was indeed a sometimes objectionable aestheticism to The New York Times’ war photographs, but it never would have occurred to me to set out to prove this empirically, or as empirically as is possible in such a subjective undertaking. Shields has done just that. A provocative undertaking. A remarkable achievement.
—ROSS McELWEE

I love so much about this book—the luscious layout that immediately dissolves into a buzzing cloud of irony, the conceptual exploration of combat semiotics, the shuddering discrepancy between the critique-quotes and the gorgeously rendered nightmare images.
—LANCE OLSEN

Shields is completely right to call the press out on its endless complicity with power, its unacknowledged distribution of ideology through reportage. A very valuable intervention in, or at least appraisal of, the relentless stream of images unproblematically glamorizing the coalition’s strategies in the Middle East. A lucid, fascinating investigation of the unholy (or maybe just holy) triangulation of violence, aesthetics, and politics that we get in such an amplified form in war.
—TOM McCARTHY

Shields forces us to experience our complicity in creating the mythology of war. In the process, he exposes how violence and pathos are packaged to elicit what we must admit are pleasurable, even inspiring sensations.
—DOUGLAS RUSHKOFF

“The kind of photos we get to see in War Is Beautiful is truly astonishing.”
--Hans Dürer, F-Stop