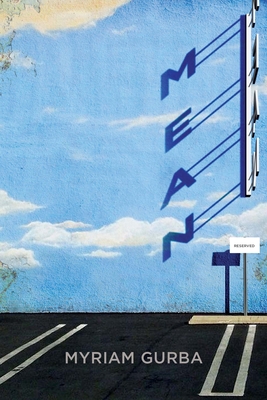 In this harrowing and hilarious memoir of growing up mixed race and gay in '90s Los Angeles, Myriam Gurba tackles difficult subject matter — sexual assault, survivor's guilt, the casual violence and racism of America —with a razor-sharp sensitivity and disarming black humor that will make you laugh despite yourself, right before your throat starts to close up. She articulates the unspeakable and impossible again and again with a biting, deadpan, and somehow perfect prose.

True crime, memoir, and ghost story, Mean is the bold and hilarious tale of Myriam Gurba's coming of age as a queer, mixed-race Chicana. Blending radical formal fluidity and caustic humor, Gurba takes on sexual violence, small towns, and race, turning what might be tragic into piercing, revealing comedy. This is a confident, intoxicating, brassy book that takes the cost of sexual assault, racism, misogyny, and homophobia deadly seriously.

Being mean isn't for everybody.

Being mean is best practiced by those who understand it as an art form.

These virtuosos live closer to the divine than the rest of humanity. They're queers.

Myriam Gurba is a queer spoken-word performer, visual artist, and writer from Santa Maria, California. She's the author of Dahlia Season (2007, Manic D) which was a finalist for the Lambda Literary Award, Wish You Were Me (2011, Future Tense Books), and Painting Their Portraits in Winter (2015, Manic D). She has toured with Sister Spit and her work has been exhibited at the Museum of Latin American Art in Long Beach. She lives in Long Beach, where she teaches social studies to eighth-graders.

Myriam Gurba lives in California and loves it. She teaches high school, writes, and makes "art." nbc described her short story collection Painting Their Portraits in Winter as "edgy, thought-provoking, and funny." She has written for Time, kcet, and The Rumpus. Wildflowers, compliments, and cash make her happy.