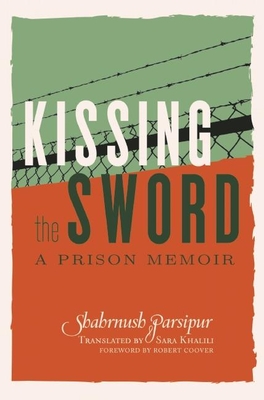 A moving account of life as a political prisoner in post-revolutionary Iran from the acclaimed Iranian author of Women Without Men.

Shahrnush Parsipur was a successful writer and television producer in her native Iran until the Revolution of 1979. Soon after seizing control, the Islamist government began detaining its citizens--and Parsipur found herself incarcerated without charges.

Kissing the Sword captures the surreal experience of serving time as a political prisoner and witnessing the systematic elimination of opposition to fundamentalist power. It is a harrowing narrative filled with both horror and humor: nights blasted by machine gun fire as detainees are summarily executed, days spent debating prison officials on whether the Quran demands that women be covered. Parsipur, one of modern Iran's great literary voices, mines her painful life experiences to deliver an urgent call for the most basic of human rights: the freedom of expression.

"Stands as a powerful testament to not only the devastations of an era, but to the integrity and courage of an extraordinary woman." --Kirkus Reviews

"Parsipur's memoir is a powerful tale of a writer's struggle to survive the worst cases of atrocities and injustice with grace and compassion. A terribly dark but truly illuminating narrative; Parsipur forces the reader to question human nature and resilience." --Shirin Neshat, artist

Born in Iran in 1946, Shahrnush Parsipur began her career as a fiction writer and producer at Iranian National Television and Radio. She was imprisoned for nearly five years by the Islamist government without being formally charged. Shortly after her release, she published Women Without Men and was arrested and jailed again, this time for her frank and defiant portrayal of women's sexuality. While still banned in Iran, the novel became an underground bestseller there, and has been translated into many languages around the world. She is also the author of Touba and the Meaning of Night, among many other books, and now lives in exile in Northern California.