Women Without Men: A Novel of Modern Iran (Paperback) 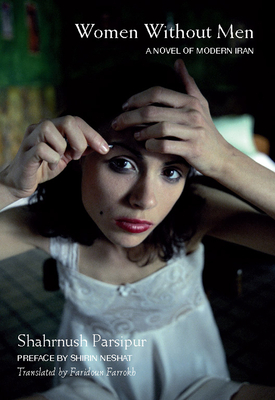 Five women living very different lives in late 20th century Iran escape men to find strength and sensitivity in themselves and each other. My favorite character is also a tree. My next favorite can read minds. There is tragedy, yes, but there is far more magic, mindfulness, and courage.

Banned shortly after publication for its depiction of female freedom, Women Without Men creates an evocative and powerfully drawn allegory of life in contemporary Iran.

Using the techniques of both the fabulist and the polemicist, Parsipur continues her protest against traditional Persian gender relations in this charming, powerful novella. --Publishers Weekly

This modern literary masterpiece follows the interwoven destinies of five women--including a wealthy middle-aged housewife, a prostitute, and a schoolteacher--as they arrive by different paths to live together in an abundant garden on the outskirts of Tehran. Drawing on elements of Islamic mysticism and recent Iranian history, this unforgettable novel depicts women escaping the narrow confines of family and society, and imagines their future living in a world without men.

Born in Iran in 1946, Shahrnush Parsipur began her career as a fiction writer and producer at Iranian National Television and Radio. She was imprisoned for nearly five years by the Islamist government without being formally charged. Shortly after her release, she published Women Without Men and was arrested and jailed again, this time for her frank and defiant portrayal of women's sexuality. While still banned in Iran, the novel became an underground bestseller there, and has been translated into many languages around the world. She is also the author of Touba and the Meaning of Night and Kissing the Sword, among many other books, and now lives in exile in Northern California.

Parsipur is a courageous, talented woman, and above all, a great writer."Marjane Satrapi, author of Persepoplis

Using the techniques of both the fabulist and the polemicist, Parsipur continues her protest against traditional Persian gender relations in this charming, powerful novella.”Publishers Weekly