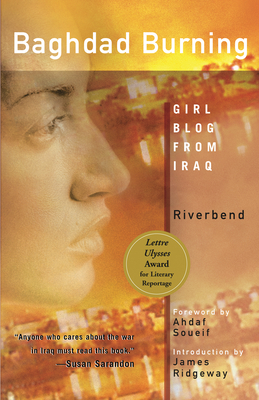 By Riverbend, James Ridgeway (Introduction by)
$14.95

In August 2003, the world gained access to a remarkable new voice: a blog written by a 25-year-old Iraqi woman living in Baghdad, whose identity remained concealed for her own protection. Calling herself Riverbend, she offered searing eyewitness accounts of the everyday realities on the ground, punctuated by astute analysis on the politics behind these events.

In a voice in turn eloquent, angry, reflective and darkly comic, Riverbend recounts stories of life in an occupied city--of neighbors whose homes are raided by US troops, whose relatives disappear into prisons and whose children are kidnapped by money-hungry militias. At times, the tragic blends into the absurd, as she tells of her family jumping out of bed to wash clothes and send e-mails in the middle of the night when the electricity is briefly restored, or of their quest to bury an elderly aunt when the mosques are all overbooked for wakes and the cemeteries are all full. The only Iraqi blogger writing from a woman's perspective, she also describes a once-secular city where women are now afraid to leave their homes without head covering and a male escort.

Interspersed with these vivid snapshots from daily life are Riverbend's analyses of everything from the elusive workings of the Iraqi Governing Council to the torture in Abu Ghraib, from the coverage provided by American media and by Al-Jazeera to Bush's State of the Union speech. Here again, she focuses especially on the fate of women, whose rights and freedoms have fallen victim to rising fundamentalisms in a chaotic postwar society.

With thousands of loyal readers worldwide, the Riverbend blog is widely recognized around the world as a crucial source of information not available through the mainstream media. The book version of this blog will have "value-added" features: an introduction and timeline of events by veteran journalist James Ridgeway, excerpts from Riverbend's links and an epilogue by Riverbend herself.

Riverbend is the pseudonym of a woman who in 2003 began writing a blog relating her first hand experiences of the US invasion and then occupation of her native Iraq. Once a computer programmer in a modern, secular state, Riverbend discusses with honesty and acute political awareness the changes that resulted in the rise of religious fundamentalism.