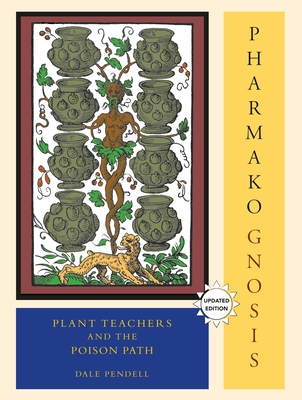 This is book number 3 in the Pharmako series.

***This paperback edition has a new introduction by the author and updated content.

This is the third and final volume of North Atlantic Books’ updated paperback edition of Dale Pendell’s Pharmako trilogy, an encyclopedic study of the history and uses of psychoactive plants and related synthetics first published between 1995 and 2005. The books form an interrelated suite of works that provide the reader with a unique, reliable, and often personal immersion in this medically, culturally, and spiritually fascinating subject. All three books are beautifully designed and illustrated, and are written with unparalleled authority, erudition, playfulness, and range.

Pharmako/Gnosis: Plant Teachers and the Poison Path includes a new introduction by the author and as in previous editions focuses on plant-based and derivative psychedelic “teachers” (including ayahuasca, peyote, LSD, and DMT) and on the “poison path” of substances such as belladonna, ketamine, and ibogaine. Each substance is explored in detail, not only with information on its history, pharmacology, preparation, and cultural and esoteric correspondences, but also the subtleties of each plant’s effect on consciousness in a way that only poets can do.The whole concoction is sprinkled with abundant quotations from famous writers, creating a literary brew as intoxicating as its subject.

The Pharmako series includes the predecessor volumes Pharmako/Poeia (which covers tobacco, alcohol, cannabis, opiates, salvia divinorum, and other substances) and Pharmako/Dynamis (focusing on stimulants and empathogens).

Plant student Dale Pendell established himself as one of the foremost popular exponents of shamanic ethnobotany with his unprecedented Pharmako trilogy. A noted poet, he was the founding editor of the avant-garde magazine Kuksu and a cofounder of the Primitive Arts Institute and has led workshops on ethnobotany and ethnopoetics for the Naropa Institute and the Omega Institute. Pendell was part of the Oracular Madness theme camp at Burning Man for a number of years (his book Inspired Madness: The Gifts of Burning Man was published by Frog Books in 2006). Also an experienced computer scientist, he lives with his wife Laura in California’s Sierra foothills.

“The poet of plants . . . Pendell may be America’s answer to Blake, Coleridge,
and Wordsworth. . . .”
—Emily Green, Los Angeles Times

“Whereas all other drug encyclopaediaists are accompanied by excessive slyness, the seemingly free verse of Dale Pendell is constrained by compulsive accuracy, to paraphrase Zarathustra’s Hom Yost, by the (scruples) that drive forth truth.”
—David Flattery, author of Haoma and Harmaline