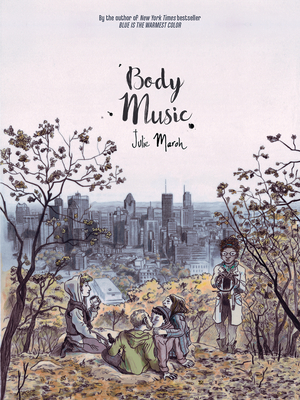 Love, love. And sexuality. And omnisexual searches through who we are as regards love, sex, life, spirituality (and all that shit). (Wo/Man.)

Julie Maroh's first book, Blue Is the Warmest Color, was a graphic novel phenomenon; it was a New York Times bestseller and the controversial film adaptation by French director Abdellatif Kechiche won the Palme d'Or at the Cannes Film Festival in 2013. Maroh's latest book, Body Music, marks her return to the kind of soft, warm palette and impressionistic sensibility that made her debut book so sensational.

Set in the languid, European-like neighborhoods of Montreal, Body Music is a beautiful and moving meditation on love and desire as expressed in their many different forms--between women, men, and gender non-conformists alike, all varying in age and race. In twenty separate vignettes, Maroh explores the drama inherent in relationships at different stages: the electricity of initial attraction, the elation of falling in love, the trauma of breaking up, the sweet comfort of a long-standing romance.

Anyone who's ever been in a relationship will see themselves in these intimate stories tinged with raw emotion. Body Music is an exhilarating and passionate graphic novel about what it means to fall in love, and what it means to be alive.

Julie Maroh studied comic art at the Institute Saint-Luc in Brussels and lithography and engraving at the Royal Academy of Arts in Brussels. She started writing her bestselling book Blue Is the Warmest Color at the age of nineteen.

Julie Maroh: Julie Maroh is an author and illustrator originally from northern France. She is the author of Blue Is the Warmest Color, which was made into the controversial Palme d'Or-winning feature film in 2013. The book, originally published in French, was published in English by Arsenal Pulp Press in 2013 and has been translated into numerous other languages. She studied comic art at the Institute Saint-Luc in Brussels and lithography and engraving at the Royal Academy of Arts in Brussels.David Homel: David Homel was born and raised in Chicago in 1952. He has been a journalist, editor, literary translator, and teacher, and has won numerous awards for translation, including the Governor General's Award for Literature, Canada's highest literary honor.