Conflict Is Not Abuse: Overstating Harm, Community Responsibility, and the Duty of Repair (Paperback) 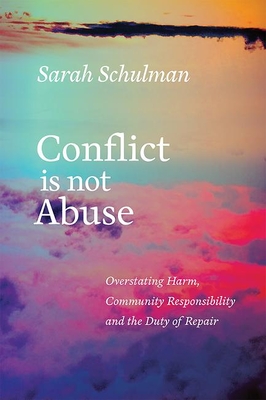 I hadn't even gotten through the table of contents and already had an emotional breakthrough and cried. Don't let the scholarly format scare you: this book is engaging enough to read on the subway (and a great place to cry, too!). You won't agree with everything Schulman says, but you will learn a lot about the (probably unhealthy) ways you deal with conflict. Get ready to dig deep.

From intimate relationships to global politics, Sarah Schulman observes a continuum: that inflated accusations of harm are used to avoid accountability. Illuminating the difference between Conflict and Abuse, Schulman directly addresses our contemporary culture of scapegoating. This deep, brave, and bold work reveals how punishment replaces personal and collective self-criticism, and shows why difference is so often used to justify cruelty and shunning. Rooting the problem of escalation in negative group relationships, Schulman illuminates the ways cliques, communities, families, and religious, racial, and national groups bond through the refusal to change their self-concept. She illustrates how Supremacy behavior and Traumatized behavior resemble each other, through a shared inability to tolerate difference.

This important and sure to be controversial book illuminates such contemporary and historical issues of personal, racial, and geo-political difference as tools of escalation towards injustice, exclusion, and punishment, whether the objects of dehumanization are other individuals in our families or communities, people with HIV, African Americans, or Palestinians. Conflict Is Not Abuse is a searing rejection of the cultural phenomenon of blame, cruelty, and scapegoating, and how those in positions of power exacerbate and manipulate fear of the other to achieve their goals.

Sarah Schulman is a novelist, nonfiction writer, playwright, screenwriter, journalist and AIDS historian, and the author of eighteen books. A Guggenheim and Fulbright Fellow, Sarah is a Distinguished Professor of the Humanities at the City University of New York, College of Staten Island. Her novels published by Arsenal include Rat Bohemia, Empathy, After Delores, and The Mere Future. She lives in New York.

Sarah Schulman: Sarah Schulman is a novelist, nonfiction writer, playwright, screenwriter, journalist and AIDS historian, and the author of eighteen books. A Guggenheim and Fulbright Fellow, Sarah is a Distinguished Professor of the Humanities at the City University of New York, College of Staten Island, and on the advisory board of Jewish Voice for Peace.