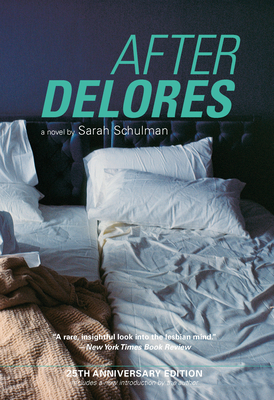 Alphabet City in the late 80s, when Avenues A through D stood for different street drugs, CBGB had lost its novelty, and watching NYPD narcs do busts in Tompkins Square was a common afternoon pastime. Schulman writes with a manic-depressive mix of urgency and reflectivity, planning crimes of passion while waitressing at a seedy diner or fantasizing about sexual conquests while lighting votive candles at a Puerto Rican deli. A gayer Desperately Seeking Susan.

A new edition of Sarah Schulman's acclaimed 1988 novel, a noirish tale about a no-nonsense coffee-shop waitress in New York who is nursing a broken heart after her girlfriend Dolores leaves her; her attempts to find love again are funny, sexy, and ultimately even violent. After Delores is a fast-paced, electrifying chronicle of the Lower East Side's lesbian subculture in the 1980s.

Sarah Schulman's previous books include Empathy, Rat Bohemia, The Child, and The Gentrification of the Mind.

Sarah Schulman is the author of sixteen books, including the novels The Mere Future, The Child, Rat Bohemia, and Empathy (all from Arsenal Pulp Press) and the recent nonfiction works The Gentrification of the Mind: Witness to a Lost Imagination and Israel/Palestine and the Queer International. She was also co-producer with Jim Hubbard of the feature documentary United in Anger: A History of ACT UP and is co-director of the ACT UP Oral History Project. She lives in New York, where she is Distinguished Professor of English at City University of New York (College of Staten Island) and a Fellow at the New York Institute for the Humanities at NYU.