In the Company of Heroes: The Inspiring Stories of Medal of Honor Recipients from America's Longest Wars in Afghanistan and Iraq (Hardcover) 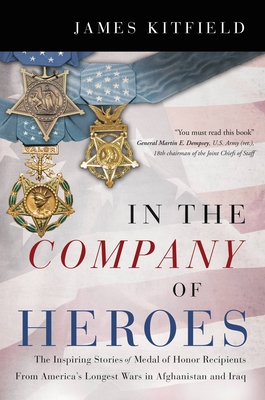 In the Company of Heroes will feature in-depth narrative profiles of the twenty-five post-9/11 Medal of Honor awardees who served in Afghanistan and Iraq. This book will focus on the stories of these extraordinary people, expressed in their own voices through one-on-one interviews, and in the case of posthumous awards, through interviews with their brothers in arms and their families. The public affairs offices of the Joint Chiefs of Staff and the individual armed services, as well as the Congressional Medal of Honor Society, have expressed their support for this project.

Stories include Marine Corps Corporal William "Kyle" Carpenter, who purposely lunged toward a Taliban hand grenade in order to shield his buddy from the blast; Navy SEAL team leader Britt Slabinski, who, after being ambushed and retreating in the Hindu Kush, returned against monumental odds in order to try to save one of his team who was inadvertently lost in the fight; and Ranger Staff Sergeant Leroy Petry, who lunged for a live grenade, threw it back at the enemy, and saved his two Ranger brothers.

He is the only three-time winner of the prestigious Gerald R. Ford Award for Distinguished Reporting on National Defense, most recently for his first-hand reporting on the Afghan War. The Military Reporters and Editors Association (MRE) and the Medill School of Journalism have awarded Mr. Kitfield their top prize for excellence in reporting an unprecedented six times, most recently in 2016 in the "Online Journalism" category for his articles in POLITICO Magazine, Yahoo News and Breaking Defense. Mr. Kitfield is author of three books, most recently Twilight Warriors: The Soldiers, Spies & Special Agents Who Are Revolutionizing the American Way of War (Basic Books, 2016). He lives in Alexandria, VA.