The Storm Before the Storm: The Beginning of the End of the Roman Republic (Paperback) 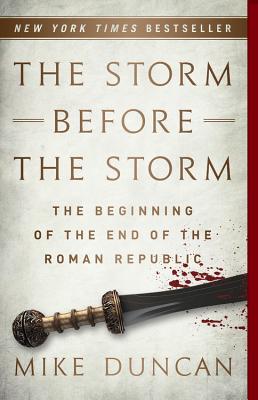 The creator of the award-winning podcast series The History of Rome and Revolutions brings to life the bloody battles, political machinations, and human drama that set the stage for the fall of the Roman Republic.

The Roman Republic was one of the most remarkable achievements in the history of civilization. Beginning as a small city-state in central Italy, Rome gradually expanded into a wider world filled with petty tyrants, barbarian chieftains, and despotic kings. Through the centuries, Rome's model of cooperative and participatory government remained remarkably durable and unmatched in the history of the ancient world.

In 146 BC, Rome finally emerged as the strongest power in the Mediterranean. But the very success of the Republic proved to be its undoing. The republican system was unable to cope with the vast empire Rome now ruled: rising economic inequality disrupted traditional ways of life, endemic social and ethnic prejudice led to clashes over citizenship and voting rights, and rampant corruption and ruthless ambition sparked violent political clashes that cracked the once indestructible foundations of the Republic.

Chronicling the years 146-78 BC, The Storm Before the Storm dives headlong into the first generation to face this treacherous new political environment. Abandoning the ancient principles of their forbearers, men like Marius, Sulla, and the Gracchi brothers set dangerous new precedents that would start the Republic on the road to destruction and provide a stark warning about what can happen to a civilization that has lost its way.

Mike Duncan is one of the foremost history podcasters in the world and author of the New York Times bestselling book, The Storm Before the Storm. His award-winning series The History of Rome has generated more than ninety million downloads and remains one of the most popular history podcasts on the internet. Duncan has continued this success with his ongoing series Revolutions -- which so far has explored the English, American, French, and Haitian Revolutions. Since debuting in September 2013, Revolutions has generated more than forty-four million downloads.

"Mike Duncan's popular podcast, The History of Rome and Revolutions, packed facts, dry humor and historical parallels into easily digestible 20-minute episodes. His new book, The Storm Before The Storm, focuses on the decades that led up to the fall of the Republic. From income inequality to questions about who does and doesn't deserve citizenship to the rise of populism, it's consistently surprising how the issues we're facing today were relevant two millennia ago. And if you're worried about those parallels, this book provides a dose of reassurance. We're divided, but hey, at least we're not laying siege to our political rivals' cities just yet!"—National Public Radio, Best Books of 2017

"The Storm Before the Storm is massively entertaining and relevant to our own time. All times, in fact. War, politics, money, power, corruption, and class warfare seem to overwhelm the republican Roman political system and the results are horrifying. Huge personalities like Marius and Sulla cast a large shadow, but forces beyond anyone's control seem to drive the narrative. A chilling reminder of what can happen in any republic. Masterfully told."—Dan Carlin, host of Hardcore History podcast

"Never has a book about history that's two millennia old been so timely. Duncan, in the sort of narrative prose that caused his podcasts to electrify history lovers everywhere, tells the story of the decay of Republican Rome-and its contemporary relevance drips off every page. The Storm Before the Storm has everything from vividly portrayed populist demagogues exploiting economic and social inequality to the failure of calcified republican institutions to adapt to changing circumstances. You'll learn as much about the problems we face today from this book as from any newspaper."—Benjamin Wittes, editor-in-chief of Lawfare and senior fellow at the Brookings Institution

"Written with the humor and the storytelling instincts that made him such a popular podcaster, Duncan brilliantly answers a vital question that is rarely asked: What weakened the late Roman Republic enough that it collapsed under the ambitions of the Caesars? This is history as it should be-compelling, witty, and ultimately revealing."—Lars Brownworth, author of In Distant Lands: A Short History of the Crusades

"Mike Duncan turns his talent for clear and engaging exposition to an underappreciated period of Roman history: the last days of the Republic, before the rise of Caesar and the agonizing civil wars that yielded the Roman Empire. Duncan's readable and witty style, and his eye for the telling detail and memorable anecdote, carry the reader through a gripping narrative."—Peter Adamson, professor philosophy, LMU Munich, and host of History of Philsophy

"Written in Duncan's usual congenial style. He zeros in on Rome's polarization between 'optimates' (conservatives) and 'populares' (populists), the disintegration of participatory democracy, and the concomitant rise in inequality, uncivil discourse, and violence. The parallels with modern times, and particularly contemporary America, leap off the page."
—Huffington Post

"This companionable and sprightly book captures the political drama and human passion of that extraordinary story."
—New Criterion

"A stark warning about what can happen to a civilization that has lost its way."—Smithsonian Online

"A fantastic primer on the causes behind... the things we must be so careful about in our own politics today. Why norms must be respected. Why problems can't be kicked down the road. Why populism is so dangerous. Definitely read this book."—Ryan Holiday, media strategist, writer, and author of The Obstacle Is the Way, Ego Is the Enemy, The Daily Stoic and Perennial Seller

"An amazingly enjoyable history... With his fresh approach, Mike Duncan shows that it is important to understand what happened two thousand years ago to understand what is happening now and in the coming centuries."—Washington Book Review

"An impressively well written, exceptionally informative, inherently fascinating historical study, The Storm Before the Storm is an extraordinary read from beginning to end."—Midwest Book Review

"A lively, extremely well-informed chronicle of nearly seven decades of Roman political and social life... Drawing on ancient sources as well as modern histories, the author reveals chilling parallels to our own time... Crucial decades in the history of the ancient world vividly rendered."
—Kirkus Reviews

"Excellent... Award-winning podcaster Duncan proves to be just as effective at working in a written medium, presenting historical personalities and complex situations with clarity and verve."—Library Journal