The Last Emperor of Mexico: The Dramatic Story of the Habsburg Archduke Who Created a Kingdom in the New World (Hardcover) 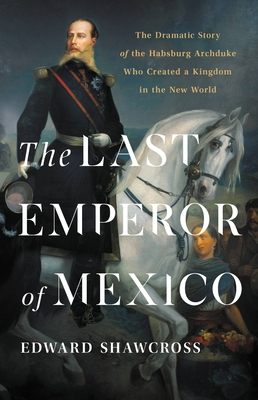 The true operatic tragedy of Maximilian and Carlota, the European aristocrats who stumbled into power in Mexico—and faced bloody consequences.

In the 1860s, Napoleon III, intent on curbing the rise of American imperialism, persuaded a young Austrian archduke and a Belgian princess to leave Europe and become the emperor and empress of Mexico. They and their entourage arrived in a Mexico ruled by terror, where revolutionary fervor was barely suppressed by French troops. When the United States, now clear of its own Civil War, aided the rebels in pushing back Maximilian’s imperial soldiers, the French army withdrew, abandoning the young couple. The regime fell apart. Maximilian was executed by a firing squad and Carlota, secluded in a Belgian castle, descended into madness.

Assiduously researched and vividly told, The Last Emperor of Mexico is a dramatic story of European hubris, imperialist aspirations clashing with revolutionary fervor, and the Old World breaking from the New.

Edward Shawcross is a historian and teacher, who earned his PhD in history from University College London. He lives in London.

“Crisply written and meticulously researched, Shawcross’s engaging book tells a lively story that will appeal to most history buffs.”—Library Journal

“The story of Maximilian is one of the most compelling, absurd, cynical, and revealing chapters in the history of Mexico and the nineteenth-century Atlantic world. Edward Shawcross has marvelous material to work with, and he handles it with insight and panache.”—H.W. Brands, author of The General vs. the President

“‘They are going to Mexico, which I cannot understand,’ wrote Queen Victoria, after dining with the royal couple chosen to reign over an unwilling nation that they had yet to see. No wonder she was perplexed. The story of how Mexico, having been halved by its aggressive neighbor to the north, was then invaded by one of Europe’s old empires, defies credulity and easy comprehension. Sure enough, Edward Shawcross seems almost to make fiction of it, deftly deploying his novelist’s eye for page-turning narrative and compellingly drawn characters. Yet as improbable as it may seem, this was a very real and very tragic chapter in two extraordinary histories—that of Mexico, and that of the arrogance of empire. If only a copy of The Last Emperor of Mexico could be sent back in time to the British queen. She would not have been able to put it down, and, in the end, would surely have understood.”
—Matthew Restall, author of When Montezuma Met Cortés

“The story of Mexico’s last emperor is an unhappy one, with an almost inevitable conclusion. Archduke Maximilian of Habsburg was a romantic dreamer, beguiled by the prospect of becoming emperor of Mexico, lied to by Napoleon III of France, who promised him unwavering military support, and tricked by Mexican politicians into thinking he was a popular choice for ruler. After three years of fireworks, grand balls, butterfly hunts, administrative chaos, bedbugs, dysentery, treachery, and civil war, Maximilian was captured and killed; his wife went mad. It is a story where no one comes out well, but Edward Shawcross tells it with verve, weaving together the big-power politics, fevered intrigue, and low villainy behind Maximilian of Mexico’s ill-starred venture.”
—Martyn Rady, author of The Habsburgs

“France’s doomed efforts to install an emperor in Mexico have long been treated as a bizarre but minor sideshow to the Civil War in the United States. In this engrossing, fast-paced book, Edward Shawcross tells the story of the French Intervention in its own right, giving a deeply human portrait of a feckless Austrian Archduke Maximilian, who cares more for court etiquette than imperial finances, and his ambitious wife Carlotta, who descends into madness as their New World empire disintegrates. This is by far the best book we have on Maximilian and Carlotta’s ill-fated rule in Mexico.”
—Alice L. Baumgartner, author of South to Freedom

“Reads like a lush screenplay with a gaudy cast: a wandering court of effete European exiles, blustering French generals, a ragtag army of Mexican rebels, a US army distracted by civil war, and high drama in Paris and London as a scheme to sit a Habsburg prince on the throne of Mexico luridly unravels.”
—Geoffrey Wawro, author of A Mad Catastrophe