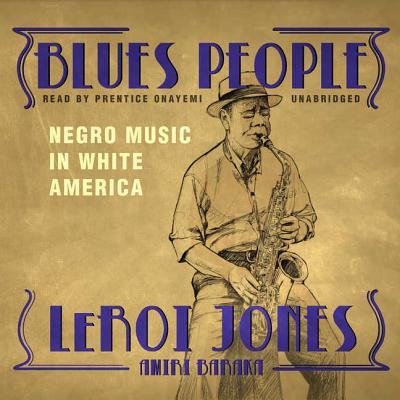 By Leroi Jones, Prentice Onayemi (Read by)
Unavailable, our apologies.
Sorry, We Can Not Obtain this Book at This Time

Formerly the second and last Poet Laureate of New Jersey, the recently departed Amiri Baraka was also the writer of the first book on African-American music by a black author. Suffused with lyrical outrage, it traces the history of a displaced people who used a foreign language and unfamiliar instruments to both describe and transform their conditions. Baraka calls this productive force the Blues Continuum, a subversive undercurrent that still drives America's most original art form: its popular music.

An exploration of how the history of America can be traced through the development of jazz and blues, this is one of the most lyrically beautiful and intellectually fierce books I have ever had the good fortune to happen upon.

The path the slave took to 'citizenship' is what I want to look at. And I make my analogy through the slave citizen's music-through the music that is most closely associated with him: blues and a later, but parallel, development, jazz... If] the Negro represents, or is symbolic of, something in and about the nature of American culture, this certainly should be revealed by his characteristic music.

So says Amiri Baraka in the introduction to Blues People, his classic work on the place of jazz and blues in American social, musical, economic, and cultural history. From the music of African slaves in the United States through the music scene of the 1960s, Baraka traces the influence of what he calls negro music on white America-not only in the context of music and pop culture but also in terms of the values and perspectives passed on through the music. In tracing the music, he brilliantly illuminates the influence of African Americans on American culture and history.