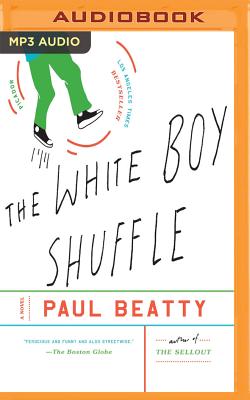 By Paul Beatty, Prentice Onayemi (Read by)
$9.99
Email or call for price

How does one overcome a disappointing seven generation legacy of all-too-American insipid, brown-nosing Tommery? How does one refute the sins of the father, grandfather, great-uncles, great-grandfathers? Beatty’s debut novel is a bildungsroman concerning a modern messiah born in the purported political corrections of late-20th century America — the early history of Gunnar Kaufman as he leaves the lazy life of Santa Monica surfing for the pressed-crease unknown of Hillside, CA.

Paul Beatty's hilarious and scathing debut novel, The White Boy Shuffle, is about Gunnar Kaufman, an awkward, black surfer bum who is moved by his mother from Santa Monica to urban West Los Angeles. There, he begins to undergo a startling transformation from neighborhood outcast to basketball superstar, and eventually to reluctant messiah of a "divided, downtrodden people."