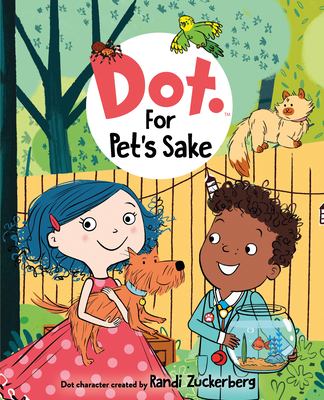 Could Dot’s new pet-sitting service be too popular? With a comically unruly menagerie under her wing, a frazzled Dot finds that even her trusty app has a limit.

Dot has volunteered to take care of a friend’s cat for the weekend, and word is spreading quickly that she’s begun a pet-sitting service. Before she knows it, Dot has a cat, a dog, a bird, a goldfish, and a tarantula to look after! But with Hal there to help, and a handy Pet Pal app tracking each pet’s needs, Dot is certain she can keep everything under control. And for a while, it seems like she can . . . until the bird flies out of its cage, the tarantula escapes its terrarium, and the cat runs out the back door. It’s pet pandemonium! With this many animals, can Dot and Hal ever restore order and make sure each pet gets the attention it needs? Animal lovers, tech aficionados, and Dot. fans alike will relate to this funny foray into biting off more than you can chew—and the power of saying no.

Dot., based on a character created by Randi Zuckerberg, is the award-winning animated TV series produced by Industrial Brothers in association with the Jim Henson Company and the Canadian Broadcasting Corporation (CBC). Since its debut in 2016, the series has received a Kidscreen Award for Best New Series, a Parents’ Choice Silver Honor, a Common Sense Media five-star rating, a BANFF World Media Festival Rogers Prize for Excellence in Canadian Content, and other accolades. Dot. airs on Universal Kids and Hulu.