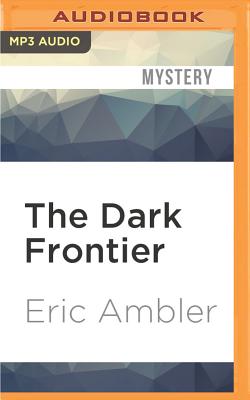 The Dark Frontier launched Eric Ambler's five-decade career as one of the most influential thriller writers of our time.

England, 1935. Physicist Henry Barstow is on holiday when he meets the mysterious Simon Groom, a representative for an armaments manufacturer. Groom invites the professor to Ixania, a small nation-state in Eastern Europe whose growing weapons program threatens to destabilize the region. Only after suffering a blow to the head--which muddles his brain into believing he is Conway Carruthers, international spy--does the mild-mannered physicist agree to visit Ixania. But he quickly recognizes that Groom has a more sinister agenda, and Carruthers is the only man who can stop him.

About the author: Eric Ambler (1909-98) was one of the most fascinating British writers of the late 1930s. His novels retain a remarkable sense of the dread and terror that filled Europe as world war broke out. Some were made into films (not least Orson Welles' superb version of Journey into Fear), all were best sellers, inventing a new, more realistic form of spy novel, where the main protagonist is not so much a hero as a victim, pursued by malevolent Fascist forces of overwhelming power. These are paranoid stories, but written at a time when paranoia was disturbingly close to common sense.