Enchanted Modernities: Theosophy, the Arts and the American West (Hardcover) 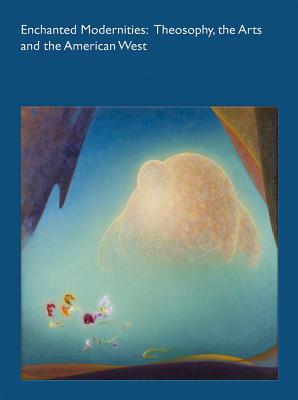 When the occult came to the American West: individualism and magic in the art of California, from Agnes Pelton to Jess

"It is in America that the transformation will take place, and has already silently commenced." With these words, written in The Secret Doctrine in 1888, occultist philosopher Helena Blavatsky drew a direct connection between the Theosophical Society and the dynamic energy of 19th-century Americanism.

Blavatsky and her successors identified the American West as the perfect site for a rebirth and re-enchantment of humanity, drawing those seeking spiritual fulfilment outside of organized religion to the dramatic landscapes of California, Arizona, Utah and New Mexico--places which have long beckoned searchers of all kinds. The syncretic nature of Theosophy allowed for and even encouraged individualism in belief, making Theosophy a good fit for the notions of freedom and personal agency that characterized the American West in the popular imaginary. Among those drawn to the American West seeking spiritual answers in the early 20th century were artists. In 2014, the Nora Eccles Harrison Museum at Utah State University staged the first exhibition to explore artistic responses to this confluence of enchanted thought and the American West. Building on this precedent, Enchanted Modernities: Theosophy, the Arts and the American West is the first publication devoted to studying these relationships in art and music. Through a series of color plates, contextual essays, interviews and interpretations of individual works by artists such as the Dynaton group (Wolfgang Paalen, Gordon Onslow Ford, Lee Mullican), Oskar Fischinger, Emil Bisttram, Lawren Harris, Raymond Jonson, Agnes Pelton, Wolfgang Paalen, Beatrice Wood, Dane Rudhyar and Jess, Enchanted Modernities explores the role of Theosophical thought in redefining the relationship between enchantment and modernism, and fostering lively cultural networks in a region that that has long captured the world's imagination.