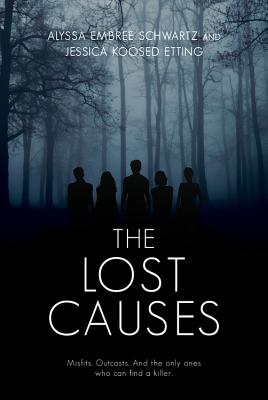 They're the kids that no one knows --- or no one wants to know. The rich depressive, the OCD chick, the hypochondriac, the drug abuser, the athlete with anger management issues. All chosen for intensive group therapy because they're out of other options. They're lost causes, the therapist tells them. She promises this support group will help them heal.There's only one problem. She's not a therapist. And that water she offers? It contains a dangerous serum that gives each of the kids a psychic power.Suddenly, they can think clearly, speak to ghosts, see the past, even move objects with their mind. Their earlier problems have vanished, but their new freedom comes with a price.Sabrina, Gabby, Z, Justin and Andrew are to help the FBI solve the grisly murder that has rocked their small town. Their new powers will help them uncover clues and follow leads that have eluded the authorities. Their outsider status gives them the perfect cover.But the same traits that make them top investigators also make them vulnerable. As they close in on the murderer, they expose a much larger conspiracy that puts them directly in harm's way and makes them wonder who --- if anyone --- they can trust.Compulsively readable, The Lost Causes sweeps readers into the place where science fiction and mystery meet, ending on a drop-dead cliffhanger that will leave them longing for more.Jessica Koosed Etting and Alyssa Embree Schwartz have written extensively for TV and film. Their YA series Georgetown Academy was released in ebook format by interactive publisher Coliloquy (since sold to Vook) and has built a strong following on Wattpad, with over 1.3 million reads and over 12,000 followers.

Alyssa Schwartz has sold multiple television pilots to NBC, CW and ABC and has written films for several studios, including Paramount and MGM. She recently branched out into Young Adult fiction with the four-book series Georgetown Academy and the mystery-thriller The Lost Causes, both co-authored with her writing partner, Jessica Etting. She resides in Washington, D.C.

The ending begs for the inevitable sequel and will have teens anticipating the next book.—School Library Journal

This book is true recreational reading and feels like the first installment of a new series.—VOYA Magazine

Those who like an action-packed and suspenseful story will turn pages right to the end ...—CM Magazine