Tragedy, the Greeks, and Us (Hardcover) 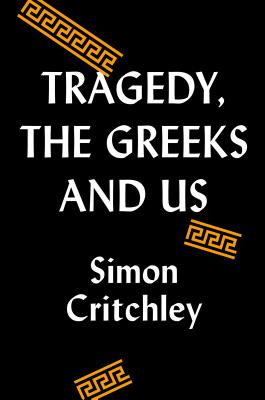 With his signature mix of academic precision and laconic humor, Critchley portrays tragedy as not only a literary genre but a mode of experience. We're always struggling with uncertainty and moral ambiguity, conspiring with our fate without even knowing it, and haunted by a past that refuses to die. Part historical exploration of how theater was produced and consumed in classical Athens, part ethico-philosophical treatise on the impossibility of the Platonic dream of a thoroughly intelligible and navigable reality, Critchley's book makes the world of the ancient Greeks feel surprisingly close to ours.

From the moderator of The New York Times philosophy blog "The Stone," a book that argues that if we want to understand ourselves we have to go back to theater, to the stage of our lives

Tragedy presents a world of conflict and troubling emotion, a world where private and public lives collide and collapse. A world where morality is ambiguous and the powerful humiliate and destroy the powerless. A world where justice always seems to be on both sides of a conflict and sugarcoated words serve as cover for clandestine operations of violence. A world rather like our own.

The ancient Greeks hold a mirror up to us, in which we see all the desolation and delusion of our lives but also the terrifying beauty and intensity of existence. This is not a time for consolation prizes and the fatuous banalities of the self-help industry and pop philosophy.

Tragedy allows us to glimpse, in its harsh and unforgiving glare, the burning core of our aliveness. If we give ourselves the chance to look at tragedy, we might see further and more clearly.

SIMON CRITCHLEY is Hans Jonas Professor of Philosophy at the New School for Social Research. His many books include Very Little . . . Almost Nothing, The Book of Dead Philosophers, The Faith of the Faithless, and Memory Theater. He is the series moderator of "The Stone," a philosophy column in The New York Times, to which he is a frequent contributor.

“A valuable corrective . . . in [a] brash, freewheeling style. . . . Lively. . . . Critchley's inquiry offers many surprises, but most unexpected is his interest in the Greek sophists.” —James Romm, The New York Review of Books

“A striking portrayal of Greek tragedy . . .  a well-pitched and paced primer, which is fun to read”—The Times Literary Supplement

“A thrill . . . riveting . . . A rather intoxicating dance with words, ideas, texts, the vortex of the life of the mind in the world, and perhaps beyond it. Critchley is an authoritative reader, and, though not a classicist, he proves an erudite, scholarly guide through layers of myth, reason, history and their interpretation, and overall a truly beguiling one . . .  Often reminiscent of Arendt, Adorno or even Levinas, verbally affluent, muscular and provocative . . . He is a particularly gifted wordsmith, an astute orator, a shrewd and learned disputant. Those who encounter tragedy for the first time on the pages of his book will not fail to be bewitched.”—Bookanista

“Substantial introductory material on tragedy and ancient philosophy; it is energetic, engaging and thought-provoking without too much abstraction and with just enough detail to add flavor . . . t has something of the chatty vigor of a successful seminar discussion. . . infectiously enthusiastic . . . genuinely invigorating . . .”—New Statesman

“Critchley finds a perspective on tragedy open to its revelatory and transformative power. Readers feel that power as they probe the dazzling words and tempestuous emotions in the tragedies of Aeschylus, Sophocles, and—above all—Euripides. . . Postmodern philosophy collides with ancient drama, generating the heat of passion, the sparks of illumination.”—Booklist [starred]

"[An] intelligent, rigorous book. Dedicated readers will have the sense of being at a thoughtful scholar’s side as he works through an intractable intellectual problem."—Publishers Weekly

“An erudite reconsideration of Greek tragedy. . . For students of Greek drama, a revelatory contemplation of the theater's enduring power. ”—Kirkus Reviews

“Combining a thorough knowledge of Attic drama, fluency with the scholarly literature, and an engaging wit, Critchley’s treatment is sophisticated yet accessible to thoughtful general readers.”—Library Journal

“Engaging and congenial . . . [Tragedy, The Greeks and Us] makes the cogent, compelling argument that we ignore Greek Tragedy at our own peril.”—New York Journal of Books