Gender and Our Brains: How New Neuroscience Explodes the Myths of the Male and Female Minds (Hardcover) 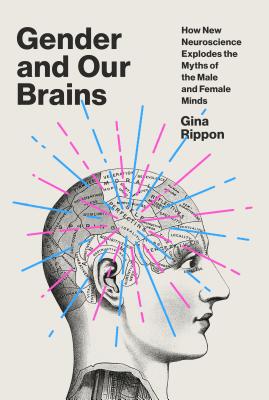 By Gina Rippon
$30.00
This book is out of stock indefinitely, unable to order at this time.

We live in a gendered world, where we are ceaselessly bombarded by messages about sex and gender. On a daily basis, we face deeply ingrained beliefs that sex determines our skills and preferences, from toys and colors to career choice and salaries. But what does this constant gendering mean for our thoughts, decisions and behavior? And what does it mean for our brains?

Drawing on her work as a professor of cognitive neuroimaging, Gina Rippon unpacks the stereotypes that surround us from our earliest moments and shows how these messages mold our ideas of ourselved and even shape our brains. By exploring new, cutting-edge neuroscience, Rippon urges us to move beyond a binary view of the brain and to see instead this complex organ as highly individualized, profoundly adaptable and full of unbounded potential.

Rigorous, timely and liberating, Gender and Our Brains has huge implications for women and men, for parents and children, and for how we identify ourselves.

GINA RIPPON is Honorary Professor of Cognitive Neuroimaging at Aston Brain Centre at Aston University in Birmingham, England. Her research involves the use of state-of-the-art brain imaging techniques to investigate developmental disorders such as autism. In 2015 she was made an Honorary Fellow of the British Science Association for her contributions to the public communication of science. Rippon is part of the European Union Gender Equality Network, belongs to WISE and ScienceGrrl, and is a member of Robert Peston's Speakers for Schools program and the Inspiring the Future initiative. She lives in the United Kingdom.

“An authoritative debunking of the notion of a gendered brain . . . Ultimately, her message is that a gendered world will produce a gendered brain. The result, unfortunately, is that boys and girls are shaped with different expectations and are often driven down career different paths. Well-crafted and thoroughly documented, this is a must-read for parents, teachers, and anyone of either sex who cares for children.”
—Kirkus, *starred review*

“Evidence of brain plasticity is key to Gina Rippon’s new book, Gender and Our Brains . . . The book is, at the core, concerned with the question of whether male and female brains are different. Where the book really shines—not surprisingly—is in the details about the science of the brain: what we know and what we do not. Rippon’s explanation of how we’ve studied the brain in the past, and how recent technological advances are giving us increasingly precise tools to do so, is endlessly interesting.”
—Emily Oster, The New York Times Book Review

“Dense with research and point of view, the book argues that science has for too long followed erroneous logic to support the notion that men and women have different brains . . . A call to rethink moldy assumptions about the importance of sex differences . . . [and] a reminder that gender messaging is never a nonissue.”
—The Washington Post

“Rippon’s sarcasm is surely the most savory . . . Rippon writes like a scientist, not a psychologist or philosopher. She makes an irascible but very down-to-earth guide through the thickets of such statistical properties as effect sizes and how they have been manipulated or ignored. And while she certainly deplores the likelihood that stereotypes about women’s deficiencies in “systematic” thinking will steer many possibly gifted scholars away from STEM fields, Rippon is no solemn moralizer weeping over the sufferings of the downtrodden. (It’s a relief, for a change, not to have those particular heartstrings plucked yet again.) Instead, she is exasperated and impatient at how steadfastly so many of her colleagues have pursued a point so fine it nearly vanishes from sight, how blind they are to the evident biases in their own ideas and work, and how very deeply invested they are in the status quo.”
—Laura Miller, Slate

“Add[s] both breadth and depth to previous discussions and provides a little more ballast to the argument that nature and nurture are not so easily divisible but in dynamic interaction.”
—New York Journal of Books

“Rippon has spent decades questioning ideas that the brains of men and women are somehow fundamentally different—work that she compellingly presents in her new book . . . Rippon’s writing bristles with frustration that this argument still needs to be stated.”
—BBC.com

“It’s a highly accessible book. It’s also an important one . . . it has the power to do vastly more for gender equality than any number of feminist ‘manifestos.’”
—Rachel Cooke, Observer

“Excellent . . . This book will confront your own prejudices, biases, and beliefs.”
—The Sunday Times (London)

“One of those books that should be essential reading before anyone is allowed to be a teacher, or buy a child a present, or comment on anything on Twitter, ever again . . . All systemizing brains out there owe it to themselves to read this calm and logical collection of evidence and science, and all empathizers will understand its importance.”
—Katy Guest, The Guardian

“The history of sex-difference research is rife with innumeracy [and] misinterpretation . . . Rippon, a leading voice against the bad neuroscience of sex difference, uncovers so many examples in this ambitious book that she uses a whack-a-mole metaphor to evoke the eternal cycle . . . a juicy history . . . [and] the book accomplishes its goal of debunking the concept of a gendered brain.”
—Lise Eliot, Nature

“A treasure trove of information and good humor, Gender and Our Brains offers thought-provoking perspectives on the latest debates about sex, gender, and the brain.”
—Cordelia Fine, author of Testosterone Rex: Myths of Sex, Science, and Society

“A clever study into flawed research and gender-based misconceptions of the mind . . . Takes a scalpel to the research surrounding sex differences in the brain with precision and humour, exposing everything from flawed research and ‘bias in, bias out’ experiments to the damage inflicted by centuries of incorrect assumptions and interpretations. Rippon rightly includes the impact of misleading media reporting and the effects of living in a society that assumes all girls like pink and women can’t read maps.”
—Financial Times

“A smart and witty addition to the literature on sex differences. Gina Rippon is one of the most outspoken scientists in this area, and she debunks a whole host of sexist stereotypes in her new book.”
—Angela Saini, author of Inferior: How Science Got Women Wrong—and the New Research That's Rewriting the Story

“A brilliant and thorough debunking of the popular myths around sex differences in brains and behavior.”
—Dr. Emily Grossman, broadcaster

“A fresh and much-needed perspective on the gender debate.”
—Dr. Anne-Marie Imafidon, founder of Stemettes

“Rippon takes aim at the flimsy science behind the idea of essential differences in men’s and women’s brains.”
—The Boston Globe

“I can’t come to a conclusion on the whole nature-nurture debate—so I keep reading.”
—Jeanette Winterson, The New York Times Book Review, By the Book