The Dance of the Arabian Babbler: Birth of an Ethological Theory (Univocal) (Paperback) 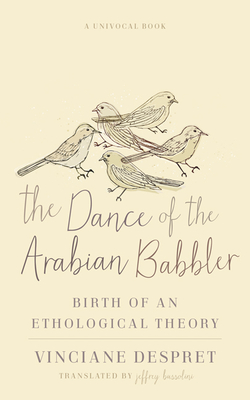 How do humans study the complex worlds of animals without imposing their own societal and scientific gaze upon them? The biologist Amotz Zahavi stakes the controversial claim that Arabian babblers are said to raise themselves up each day to dance and tend to one another in the early morning sun. Such a claim will provoke the interest and intellectual curiosity of a young philosopher and psychologist recognizing that the best way for her to observe the practices of scientists at work is to join them on their terrain. Embedding herself in the field alongside ethologists in the Negev desert, Vinciane Despret deftly depicts and reflects on the process by which scientists construct their theories within the milieu of the animals they study. Along the way, and not without humor, Despret analyzes a variety of theories posited by many well-known thinkers, including Zahavi, who devoted his life to the interpretation, companionship, and conservation of the Arabian babbler bird, and naturalists such as Charles Darwin and Pierre Kropotkin.

Vinciane Despret is a philosopher and psychologist who has published on the relation between the human and the animal. Her most recent books include What Would Animals Say If We Asked the Right Questions? (Minnesota, 2016), Au Bonheur des Morts, and Habiter en Oiseau.

jeffrey bussolini is associate professor of sociology and anthropology at the City University of New York and codirector of the Center for Feline Studies. She is coeditor of The Philosophical Ethology of Vinciane Despret.

"The naturalist’s eye guides the philosopher’s reflection in Vinciane Despret’s delicate study of philosophical anthropology and ethology in dialogue with Isabelle Stengers and Bruno Latour. In a beautiful translation by jeffrey bussolini, Despret explores the origin story of Amotz Zahavi’s ‘handicap principle,’ a kind of species-specific potlatch (display and gaze), touching on problems of anthropomorphism, zoomorphism, and animal behavior. Underlining the ‘influence of the observer,’ and including the conflict between mathematical models and embedded interpretation, Despret offers a fascinating inquiry into the human and the animal."—Babette Babich, Fordham University

"It is with this book that Vinciane Despret introduced her unique research style: follow scientists with the same care that they follow their animals and select among animals those that render their scientists most interesting! This is how she taught her readers to escape the stultifying ‘voice over’ of so many nature narratives. Be ready for quite a dance."—Bruno Latour