Sound, Image, Silence: Art and the Aural Imagination in the Atlantic World (Paperback) 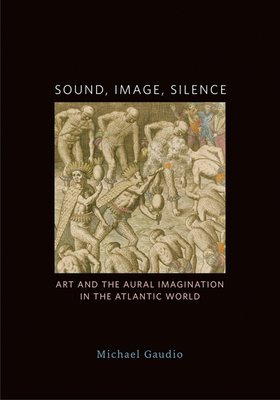 A visionary new approach to the Americas during the age of colonization, made by engaging with the aural aspects of supposedly “silent” images

Colonial depictions of the North and South American landscape and its indigenous inhabitants fundamentally transformed the European imagination—but how did those images reach Europe, and how did they make their impact? In Sound, Image, Silence, noted art historian Michael Gaudio provides a groundbreaking examination of the colonial Americas by exploring the special role that aural imagination played in visible representations of the New World.

Considering a diverse body of images that cover four hundred years of Atlantic history, Sound, Image, Silence addresses an important need within art history: to give hearing its due as a sense that can inform our understanding of images. Gaudio locates the noise of the pagan dance, the discord of battle, the din of revivalist religion, and the sublime sounds of nature in the Americas, such as lightning, thunder, and the waterfall. He invites readers to listen to visual media that seem deceptively couched in silence, offering bold new ideas on how art historians can engage with sound in inherently “mute” media.

Sound, Image, Silence includes readings of Brazilian landscapes by the Dutch painter Frans Post, a London portrait of Benjamin Franklin, Thomas Edison’s early Kinetoscope film Sioux Ghost Dance, and the work of Thomas Cole, founder of the Hudson River School of American landscape painting. It masterfully fuses a diversity of work across vast social, cultural, and spatial distances, giving us both a new way of understanding sound in art and a powerful new vision of the New World.

Michael Gaudio is professor of art history at the University of Minnesota, Twin Cities. He is author of Engraving the Savage: The New World and Techniques of Civilization (Minnesota, 2008).

"In this breathtaking study Michael Gaudio invites us to listen to visual media that seem couched in silence or in deceptive tranquility. He studies the graphic character of speech and dance in copperplate engravings of Jean de Léry’s encounter with the New World; soundscapes of seventeenth-century paintings depicting Dutch holdings in Brazil; Enlightenment art depicting thunder and lightning; the voice of nature in American painting of the early 1800s; the sound of music in very early cinema. Of broad scope, written with uncommon force and elegance, Sound, Image, Silence inspires by virtue of a unique aural vision. It changes the direction of our appreciation of the visual arts."—Tom Conley, Harvard University

"Sound, Image, Silence is a study of how art making is a dance among sensorial pathways and human encounter. Michael Gaudio searches for interstitial meanings between many kinds of binaries in our cultures and histories—between what is heard and not heard, mimesis and invention, assimilation and otherness. What results is an enthralling, crackling, heady journey into heretofore silent territories of artistic imagination."—Asma Naeem, Eddie C. and C. Sylvia Brown Chief Curator, The Baltimore Museum of Art

"One of the many merits of Gaudio’s bracing book is how it avoids positing sound as synonymous with speech, as a mere metaphor for how certain pictures “mean.” Thus Sound, Image, Silence, in a refreshing way, moves us away from the enduring Derridian preference for différence as something written rather than heard."—CAA Reviews

"With both eyes and ears in sound studies, Michael Gaudio’s clairaudience brilliantly achieves, in Sound, Image, Silence, to tune in to that uncertain Atlantic passage, turning it on into a captivating journey between sight and sound."—Visual Studies

"Generous in its approachability and well-suited for the early American studies classroom."—Early American Literature