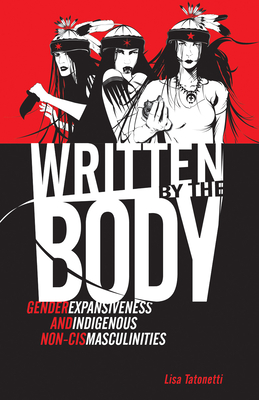 Examining the expansive nature of Indigenous gender representations in history, literature, and film

Within Native American and Indigenous studies, the rise of Indigenous masculinities has engendered both productive conversations and critiques. Lisa Tatonetti intervenes in this conversation with Written by the Body by centering how female, queer, and/or Two-Spirit Indigenous people take up or refute masculinity, and, in the process, offer more expansive understandings of gender.

Written by the Body moves from the eighteenth- and nineteenth-century archive to turn-of-the-century and late-twentieth-century fiction to documentaries, HIV/AIDS activism, and, finally, recent experimental film and literature. Across it all, Tatonetti shows how Indigenous gender expansiveness, and particularly queer and non-cis gender articulations, moves between and among Native peoples to forge kinship, offer protection, and make change. She charts how the body functions as a somatic archive of Indigenous knowledge in Native histories, literatures, and activisms—exploring representations of Idle No More in the documentary Trick or Treaty, the all-female wildland firefighting crew depicted in Apache 8, Chief Theresa Spence, activist Carole laFavor, S. Alice Callahan, Thirza Cuthand, Joshua Whitehead, Carrie House, and more.

In response to criticisms of Indigenous masculinity studies, Written by the Body de-sutures masculinity from the cis-gendered body and investigates the ways in which female, trans, and otherwise nonconforming masculinities carry the traces of Two-Spirit histories and exceed the limitations of settler colonial imaginings of gender.

Lisa Tatonetti is professor in the Department of English at Kansas State University. She is author of The Queerness of Native American Literature (Minnesota, 2014) and coeditor of Sovereign Erotics: A Collection of Contemporary Two-Spirit Literature.

"‘Masculinity’ is a loaded word; it has become linked with violence, cruelty, and the hetero-normative male body. Lisa Tatonetti’s Written by the Body, however, unpacks the ways Indigenous peoples negotiate and refuse settler-colonial definitions of masculinity in texts, films, and lived experience—and in doing so, engage in the creation of life-affirming strategies for survival and thrivance. Tatonetti’s specific focus on the expression of Indigenous masculinities, in particular, is a breath of hope for those of us working to heal from damage inflicted by histories of colonial policing of gender alternatives. As she notes, ‘Indigenous gender articulations are expansive; held in variously gendered bodies rather than tethered to settler binaries, they shift in mode and meaning and hold real creative potential.’ It is this transformational creativity which Tatonetti’s work notices and celebrates, bringing into focus the ways that Indigenous concepts of masculinity manifest their own sovereignty and serve to nurture Indigenous identities."—Deborah A. Miranda, author of Altar for Broken Things and Bad Indians: A Tribal Memoir