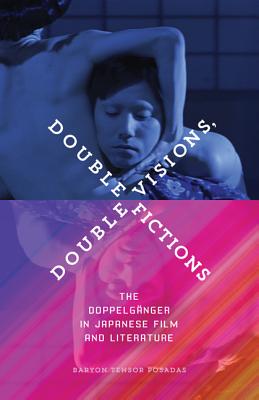 By Baryon Tensor Posadas
Unavailable, our apologies.
Sorry, We Can Not Obtain this Book at This Time

Since its earliest known use in German Romanticism in the late 1700s, the word Doppelgänger (double-walker) can be found throughout a vast array of literature, culture, and media. This motif of doubling can also be seen traversing historical and cultural boundaries. Double Visions, Double Fictions analyzes the myriad manifestations of the doppelgänger in Japanese literary and cinematic texts at two historical junctures: the interwar period of the 1920s and 1930s and the present day.

According to author Baryon Tensor Posadas, the doppelgänger marks the intersection of the historical impact of psychoanalytic theory, the genre of detective fiction in Japan, early Japanese cinema, and the cultural production of Japanese colonialism. He examines the doppelgänger’s appearance in the works of Edogawa Rampo, Tanizaki Jun’ichiro, and Akutagawa Ryunosuke, as well as the films of Tsukamoto Shin’ya and Kurosawa Kiyoshi, not only as a recurrent motif but also as a critical practice of concepts. Following these explorations, Posadas asks: What were the social, political, and material conditions that mobilized the desire for the doppelgänger? And how does the dopplegänger capture social transformations taking place at these historical moments?

Double Visions, Double Fictions ultimately reveals how the doppelgänger motif provides a fascinating new backdrop for understanding the enmeshment of past and present.

Baryon Tensor Posadas is assistant professor of Asian languages and literatures at the University of Minnesota and translator of The Sacred Era by Yoshio Aramaki (Minnesota, 2017).

"Double Visions, Double Fictions is a truly fresh contribution to Japanese literary and film studies by way of an ingenious examination of the doppelgänger. For Baryon Tensor Posadas, the doppelgänger functions not merely as a crafty aesthetic device, but as an actual conceptual practice mobilized by some of Japan’s most important modern writers and filmmakers."—Eric Cazdyn, University of Toronto

"In Double Visions, Double Fictions, Baryon Tensor Posadas carefully traces the appearance and proliferation of the doppelgänger in Japan across various cultural and intellectual domains, including literature, cinema, and psychoanalysis. In his masterful analysis, the doppelgänger is not merely one figure among others, but rather, in its destabilizing effect on concepts of origin and imitation, one that highlights the core conflicts underlying modernity in Japan, including its fraught relation to the West and its emergence as a colonial power."—Seiji Lippit, author of Topographies of Japanese Modernism

"The doppelgänger haunts, not only as a double but also through its multiple iterations. Approaching this uncanny figure as a form of a genre, Double Visions, Double Fictions takes us on an exciting intellectual adventure, tracing its recursions through various media forms and a broad span of historical periods in modern and contemporary Japan."—Tomiko Yoda, Harvard University