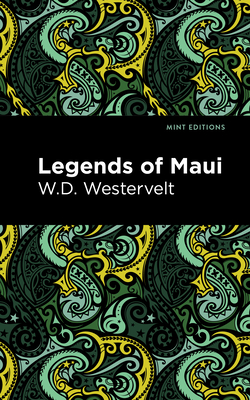 Legends of Maui (1910) is a collection of Hawaiian folktales and myths anthologized by W. D. Westervelt. Connecting the origin story of Hawaii to the traditions of other Polynesian cultures, Westervelt provides an invaluable resource for understanding the historical and geographical scope of Hawaiian culture. Drawing on the work of David Malo, Samuel Kamakau, and Abraham Fornander, Westervelt, originally from Ohio, became a leading authority on the Hawaiian Islands, publishing extensively on their legends, religious beliefs, and folk tales. "The Maui legends possess remarkable antiquity. Of course, it is impossible to give any definite historical date, but there can scarcely be any question of their origin among the ancestors of the Polynesians before they scattered over the Pacific Ocean. They belong to the prehistoric Polynesians." Paying homage to the importance of Maui across Polynesian cultures, Westervelt introduces his groundbreaking collection of legends on Hawaii's founding deity. A trickster figure, the demigod Maui was said to have convinced his brothers to take him fishing. Having let his line fall to the ocean floor, he claims to have caught an enormous fish, causing them to paddle away with all their might. As they strain to bring their catch to the surface, the islands are pulled from the bottom of the ocean, creating a new land to live on. In Westervelt's telling, Maui was also a protean figure, able to shapeshift into different animals in order to discover new places and wreak havoc on friends and foe alike. Central to Hawaiian history and religion, Maui continues to be celebrated in Hawaii and across the Pacific today. With a beautifully designed cover and professionally typeset manuscript, this edition of W. D. Westervelt's Legends of Maui is a classic of Hawaiian literature reimagined for modern readers.