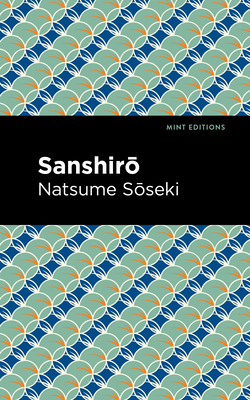 Sanshirō (1908) is a novel by Natsume Sōseki. Inspired by the author's experience as a student from the countryside who moved to Tokyo, Sanshirō is a story of family, growth, and identity that captures the isolation and humor of adjusting to life on one's own. Recognized as a powerful story by generations of readers, Sanshirō is a classic novel from one of Japan's most successful twentieth century writers.

Raised on the island of Kyushu, Sanshirō Ogawa excels in high school and earns the chance to continue his studies at the University of Tokyo. On his way there, he naively accepts an invitation to share a room with a young woman in Nagoya, realizing only too late that she has other things than sleep in mind. As he adjusts to life in the big city, he finds himself stumbling into more uncomfortable situations with women, radical political figures, and interfering colleagues, all of which shape his sense of identity while teaching him the value of trust, courage, and self-respect. While he misses his family and friends in Kyushu, Sanshirō learns to value his newfound independence, forming friendships that will last a lifetime. Sanshirō proves a gifted student but struggles to understand the intricacies of academic life. As he begins a relationship with the lovely Mineko, he begins to doubt his ability to defy tradition. Will he return home to raise a family in Kyushu, or remain in Tokyo to chart a path of his own? Eminently human, Sanshirō is a beloved story of isolation, morality, and conflict from a master of Japanese fiction.

With a beautifully designed cover and professionally typeset manuscript, this edition of Natsume Sōseki's Sanshirō is a classic work of Japanese literature reimagined for modern readers.