The Golden Boys Along the River Allagash (Hardcover) 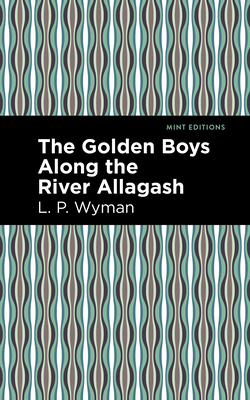 The Golden Boys Along the River Allagash (1923) is an adventure novel by L.P. Wyman and one of seven books in his vastly underrated--and relatively unknown--Golden Boys series.

Each novel follows the adventures of Bob and Jack Golden, brothers from Maine with curious minds and adventurous hearts. Together, often alongside their trusted friend Rex Dale, the Golden Boys use their problem-solving skills and wilderness experience to overcome danger, discover strange places, and grow into fine young men.

In The Golden Boys Along the River Allagash, Bob and Jack Golden, with their friend Rex Dale, journey from the comfort of their home in Maine to discover the lost lake known only as Umsaskis. Along the way, they recruit their old friend and mentor Kernertok, a Native American trapper, who joins their expedition along with his trusted dog Sicum. Voyaging in a canoe and on foot, the adventurous group makes its way north to find the lake. On their way, they are forced to stage several daring rescues, as well as to survive a terrifying encounter with a vicious wildcat. As they near their destination, and as the Golden Boys and their two friends find they are not all alone in the deep, dark woods, they need both knowledge and luck not just to find Umsaskis, but to survive.

L.P. Wyman's The Golden Boys Along the River Allagash is a timeless tale that is both easy to read and difficult to put down. Published several years before the debut of The Hardy Boys series, which would dominate young adult fiction for decades to come, The Golden Boys series is long overdue for the attention and appreciation it deserves. Although originally published for an audience of teenage boys, Wyman's series is perfect for children of all ages and genders, as well as for adults looking to return to the simple, exciting fiction of their youth.

With a beautifully designed cover and professionally typeset manuscript, this edition of L.P. Wyman's The Golden Boys Along the River Allagash is a newly unearthed classic of young adult literature reimagined for modern readers.